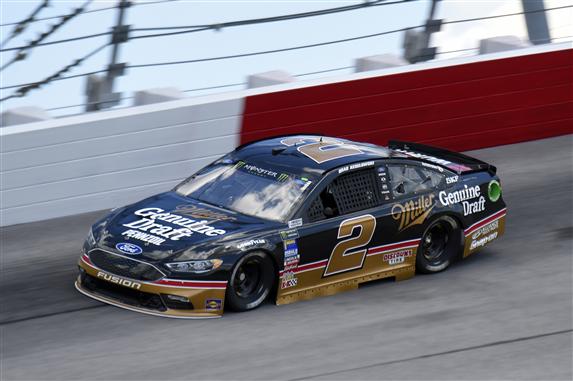 It is throwback week for the NASCAR. The car will be wrapped in their throwback schemes to pay tribute to the drivers who paved the way for today’s stars. This is one of my favorite races of the season and it is one of the crown jewels on the NASCAR schedule. The Southern 500 can be seen Sunday evening (Sep. 1st) at 6 p.m. ET on NBC Sports Network.

There are 2 races left in the regular season of the Fantasy Live game. There is no reason to save allocations now. If a driver qualifies up front and has a lot of speed in practice, we need to use him even if it is our last allocation.

Martin Truex Jr. (1): I am in the same situation with Truex Jr. as I am in with Busch. I am not ending the season with an allocation with Truex in my pocket so he will be in the lineup this week. Truex ranks third in Driver Rating on the steep tracks this season (Las Vegas, Dover and Bristol) and he ranks No. 1 in Driver Rating in the 550 HP aero package. Also, Indianapolis is the worst track for Truex so this is the last week to use him. The JGR cars usually race a lot better than they qualify so I am not worried about his starting position.

Brad Keselowski (2): Keselowski won the Southern 500 last year and he should be a threat to get back to Victory Lane again this week. He has finished 2 of the last 4 Southern 500s in the top 2. He also spends a lot of time running in the top 5 so that means Keselowski should score a lot of Stage points. The Southern 500 has more pit stops than any other race on the schedule. That means there is a lot of time for the No. 2 to use pit strategy to gain track position. No team does it better than the Blue Deuce.

Joey Logano (2). Logano has been very good at Darlington over the last 4 seasons. He finished 2nd last year, 5th in 2016 and 4th in 2015. Logano has the 3rd best Driver Rating in the races on the tracks where the 550 HP aero package was used. Logano does not have a Southern 500 trophy and he said a win at this track is very important to him. Teams were talking about how well he was running the top of the track in practice. He is battling Kyle Busch for the regular season championship and the 15 playoffs points that go with it. I expect the No. 22 tea to try and score as many points as possible Sunday.

Kurt Busch (1): Darlington ranks as the best track for Busch. He has the 2nd best Driver Rating and the 2nd best average finishing position. Busch really liked his car in practice. He posted the 4th-fastest speed with the 8th-best 10-lap average speed and the 6th-fastest 20-lap average speed. I am running out of allocations with Busch but I have to have him on my team at his best track.

Kyle Larson (3): Larson put on a clinic last year at Darlington. He 284 and won both Stages. Larson has averaged 204 laps led in the last 2 Southern 500s and he is averaging 17 Stage points per race. He looks like he is ready to dominate the race again Sunday night. Larson posted the fastest 5-lap, 10-lap, 15-lap and 20-lap speed in final practice. All of the teams were talking about how fast the No. 42 car was at the top of the track. The only question is if he can keep it off the wall for 500 miles but we have the Garage drive as an insurance policy.

My Garage Driver this week will be Kyle Busch (1). Busch had problems with his car in qualifying. As a result he will start in the back. I am not worried about the No. 18 car though. The first Stage is 100 laps so Busch will have plenty of time to get to the top 10. The No. 18 car was 2nd fast on the 5-lap, 10-lap, 15-lap and 20-lap average speed chart. I am not ending the season with an allocation with the No. 18 car in my pocket, so I will start him in the Garage and if he quickly makes his way to the front, I will put Busch into the race.

** I would use Denny Hamlin and Kevin Harvick over Kurt Busch and Joey Logano if I could.