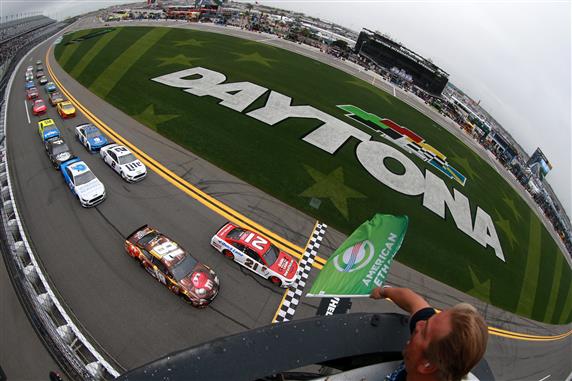 NASCAR is promoting the 2021 season as “The Best Season Ever.” They may be right. The field is stacked with talented drivers and the less-funded teams will have better cars this year since the well-funded teams are selling their inventory and preparing for the NexGen car in 2022. Fantasy Live has been my best game for the last decade. My picks have beaten 99% of the completion for 11 years in a row. I do not plan to have the streak end this season.

The Daytona 500 is an unpredictable race because drivers do not control their fate in this race. They can do their best to be in the best position to win the Daytona 500, but if a driver two rows ahead of them screws up, the driver will find his car in the fence. The best way to eliminate this risk is to look at the drivers who score the most Stage points. A driver who crashes could still score well if he scores a lot of Stage points. He is the driver’s stage points in the current aero package at Daytona. (Only Joey Logano and Ricky Stenhouse Jr. have scored Stage points in every Stage in the current aero package) 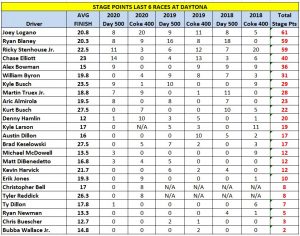 I mapped out my allocations with each driver for each race. I do this each year to ensure I am using each driver at their best tracks. I will tweak it during the season if a driver gets on a hot-streak, but it gives me an idea of what allocations I have left with each driver. I will be using some of the top drivers in the Daytona 500 to help ensure we get off to a hot start and because I know I can get through the season with one less allocation with Denny Hamlin, Joey Logano and Ryan Blaney.

Denny Hamlin (10): A lot of people will fade Hamlin this week and save his allocations for more predictable tracks. I will take my chances with the No. 11 car. Yes, the racing at Daytona is unpredictable but Hamlin is just a safe as a pick this week as he is at any other track. Hamlin has finished 1st, 1st, 3rd, 17th, 1st, 4th and 2nd in his last six Daytona 500’s. That is a 4.8 average finishing position since 2013. Hamlin could easily crash out of the race, but the numbers suggest he will finish in the top three.

Joey Logano (10): Logano had a horrible season at Daytona last year. I doubt Logano forgot how to win at this track. Even if Logano crashes out of the race, he will not hurt you too much because he is one of the best drivers at scoring Stage points at Daytona. Logano has scored Stage points in every Stage since 2018 and he won both Stages in the last race at Daytona. Logano also has the best spotter in the business (T.J. Majors). I expect Logano to bounce back after a poor season at Daytona in 2020.

Ryan Blaney (10): Blaney has become the second-best driver on the Superspeedways behind Denny Hamlin. He finished second in the Daytona 500 last year and sixth in the Coke Zero 400 in August at Daytona. Blaney is also good at scoring Stage points at this track. Blaney has finished in the top-10 in every Stage except one since NASCAR went to the current aero package. Blaney should be a safe pick for your lineup Sunday.

Aric Almirola (10): Almirola had the fastest Ford in qualifying and the fastest car in his Duel race. Almirola led 52 of the 60 laps and now he will likely be starting from the front row Sunday (If William Byron goes to a backup car and starts in the back). Almirola has been better at Talladega than he has been at Daytona, but he has had some decent finishes at Daytona. That No. 10 car is too good to pass up, so I will take a chance with Almirola Sunday.

Austin Dillon (10): Dillon is no stranger to finishing up front at Daytona. He won the 2018 Daytona 500 and Dillon finished 16th in 2019 and 12th last year. His car looked fast and it had a lot of drivability in it. Dillon should spend a lot of the race up front, score a lot of Stage points and should have a good chance for a top-10 finish Sunday. There is just something special about the No. 3 car at Daytona.

Garage Driver: Ryan Newman (10) will be my Garage driver this week. I need a safe pick that will not crash. Newman is that guy. Newman has finished nine of the last 10 races at Daytona on the lead lap. We need a driver who will be available to swap into our lineup if one of our drivers crashes early in the race. Newman should be running in the back and waiting to make his move. I like that he has the upside to win the race too.

* The number next to the driver’s name is the number of allocations I have left with the driver.