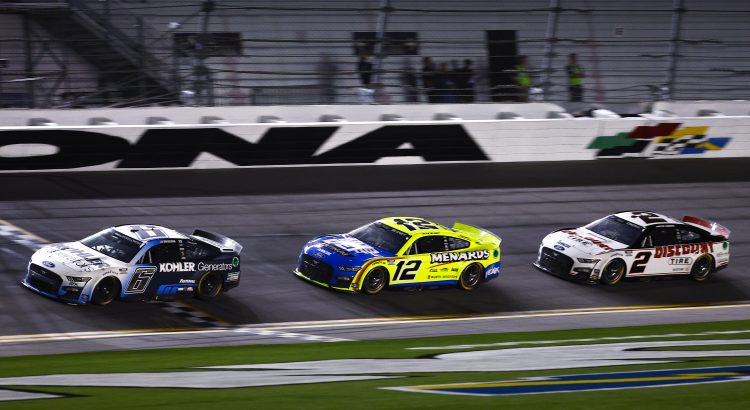 The NASCAR Cup Series will travel back to Daytona to complete their regular season. That also means this is the last race for the Fantasy Live regular season. The FantasyRacingTips.com picks for this game have outscored 99% of the entries since 2011, but it looks like the streak will come to an end this year. The picks are currently outscoring 96.3% of the entries. Losing 158 points from Denny Hamlin and Kyle Busch’s DQ at Pocono did not help, but I blame it on a slow start to the season. Who knew Ross Chastain, Daniel Suarez and Tyler Reddick would be three of the best picks this year? Heck, even Bubba Wallace is having a good season. I did learn a lot and I look forward to applying what I learned to the Fantasy Live Playoff picks and for the next season.

My strategy this week will be to select the drivers with a history of running up front and scoring Stage Points. Once the Stage Points are added to our lineup they cannot be taken away. So even if our driver crashes in the race we have some points in the bank. I want as many of these points as possible Saturday night. 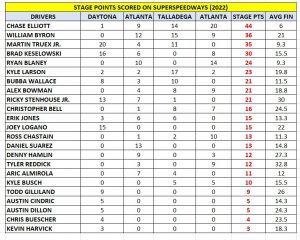 Here are the picks for the Coke Zero 400… 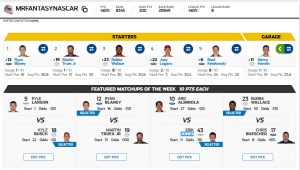 RYAN BLANEY (1): Blaney has been one of the best drivers on the Superspeedways in recent years. He is nearly locked into the playoffs since Kurt Busch withdrew his waiver for a playoff spot and now there are two spots in the playoffs open this week. There is a chance Blaney could ride around the back and stay out of trouble. I doubt he will do that. It is not his style of racing on the Superspeedways. I expect Blaney to go to the front, lead a lot of laps, score a lot of Stage Points and have a great chance to win the race. If he does ride around the back, I will put Blaney in the Garage..

MARTIN TRUEX JR. (1): We need to make up a lot of ground on our competition and we cannot do if we play the same five drivers as our competitors. I doubt many people will use Truex because his stats are not good at Daytona. He is great at scoring Stage Points though. Truex won both Stages in the Daytona 500 and he has scored the third-most Stage Points on the Superspeedways this season. He needs as many points as possible or he needs to stay in front of the drivers who have not been to Victory Lane yet. I would not be surprised if Truex won both Stages again Saturday night and scored well in Fantasy Live.

BUBBA WALLACE (8): Is there anything such as a safe pick at Daytona? If so, it is probably Wallace. He finished second at Daytona last year and he finished second in the Daytona 500 this year. He has also scored the seventh-most Stage Points and nearly has a top-10 average finishing position on the Superspeedways this year. Wallace won at Talladega last year. He will have a good chance to win Saturday night. (I am not worried about his starting position)

JOEY LOGANO (2): Logano used to be one of the best picks on the Superspeedways but he has not had much luck lately. I do know that Logano will run up front and stack Stage Points for our team. That is his strategy in these races. Logano starts third so he could easily get the lead early and win Stage 1. I will play Logano Saturday night and hope his bad luck at Daytona comes to an end.

BRAD KESELOWSKI (8): Keselowski has not been good this year but he sure looked good at Daytona in February. Keselowski won his Duel Race and then he score 16 Stage Points and finished ninth in the Daytona 500. He leads the Cup Series with seven wins on the Superspeedways. He has scored the fourth-most Stage Points on the Superspeedways this year. I expect Keselowski will run up front Saturday night and have a good chance to finish in the top-five.

* I would use Chase Elliott if I had any allocations left with the No. 9 car. Elliott is the best pick in the field based on the Stage Points and average finishing position on the Superspeedways this year. I would use him over Joey Logano and move Brad Keselowski to the Garage.

GARAGE DRIVER: DENNY HAMLIN (1): I need a safe driver in the Garage because I am sure at least one of my drivers will get caught up in a wreck Saturday night. It is hard to find a safer driver than Hamlin. He has eight of his last nine races at Daytona in the top-10. He usually runs up front and scores Stage Points too. I like having Hamlin in the Garage as an insurance policy this week.

ARIC ALMIROLA vs. ERIK JONES (My pick is ERIK JONES)