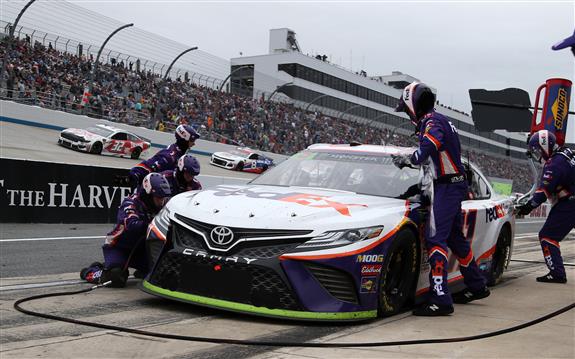 The Cup Series will compete at another high-banked, intermediate track this week when they travel to Dover International Speedway. “The Monster Mile” is a tough track that takes a good rhythm in and off the gas-pedal to master. The same drivers run well at Dover every season, so this race should not be too difficult to predict. The Drydene 400 can be seen Sunday at 2 p.m. ET on FS1.

The Fantasy Live picks continue to score well. I was worried about fading Martin Truex Jr. last week but I wanted to save his allocations for Dover and the Road Courses. The picks scored 234 points and are beating 97.6% of the entries. Not too bad. We should get another high score this week.

Here are my picks for the Drydene 400… 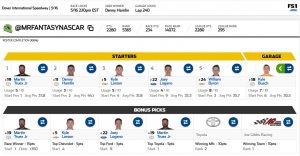 * I will go all in on Martin Truex Jr. this week. I will pick Truex to win, Toyota as my Top Manufacturer and Joe Gibbs Racing as my Top Team.

Martin Truex Jr. (5): Martin Truex Jr. is running too well and his results at Dover are too good to fade this week. Truex has finished 1st, 1st, 5th and 1st in the races where the 750 HP aero package was run this year (that does not include the dirt race at Bristol or the road course at Daytona). He has also finished 1st, 2nd, 2nd and 2nd in his last four races at Dover. Truex starts from the pole, has the No. 1 pit stall and should have a great chance to win his fourth race of the season Sunday.

Denny Hamlin (3): Denny Hamlin is still looking for his first win this year and he could get it at Dover. Hamlin starts in the front row so he will have the track position to dominate some of this race. He has a series-best 3.2 average finishing position in the races where the 750 HP aero package was used this season. Hamlin won at Dover last year and he lead 218 laps in the race in 2019. The No. 11 car should score a lot of Stage points and compete with Martin Truex Jr. for the win this week.

Kyle Larson (5): Kyle Larson did not compete in the two races at Dover last year but he put a whipping on the field in his last race at the Monster Mile. He led 154 laps, scored 17 Stage points and won the race. Dover ranks as his second-best track so I will use an allocation with Larson this week. I do not plan to use Larson much the next month so I am not worried about using an allocation Sunday.

Joey Logano (4): Joey Logano has been a beast in the races where the 750 HP aero package has been used this year. He finished 2nd at Phoenix, won the Bristol Dirt Race, 6th at Martinsville, 3rd at Richmond and ran most of the race in the top-five at Darlington but a pit road penalty sent him back in the field. Logano finished 6th and 8th in the two races at Dover last year. He should finish in the top-10 again this week.

William Byron (8): William Byron is on a hot streak right now and I am going to keep using him until he cools off. Byron tied Jimmie Johnson for the most consecutive top-10 finishes for Hendrick Motorsports. He has now finished 10 races in a row in the top 10. He should extend the streak Sunday. He started 23rd and drove right through the field in the last race at Dover. Byron scored 13 Stage points and finished fourth in the race. He is running a lot better this season. Byron starts 3rd so he should score a lot of Stage points and have a good chance to finish in the top-five Sunday.

Garage Driver Kyle Busch (7):  Kyle Busch is starting to heat up. He won the race at Kansas two weeks ago and he finished 3rd last week at Darlington. He has been pretty good in the 750 HP aero package at Dover. His average finishing position in those races is 9th. Busch starts 6th and he should run most of the race in the top-10; scoring a lot of Stage points. I would not be surprised if Rowdy won this week. I will have Rowdy as my insurance policy this week.