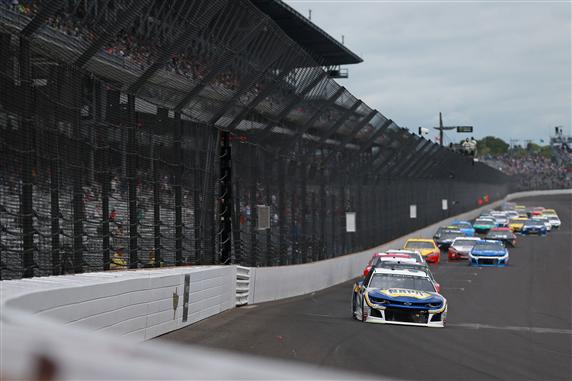 The NASCAR Cup Series travels to Indianapolis this week to compete on one of the most iconic tracks in the world. The Brickyard 400 was run in September the last two seasons but it will return to the month of July on the NASCAR schedule this year. This time the race gets the 4th of July weekend spot. Nothing is better than spending time with friends and family and watching some racing. The Big Machine Hand Sanitizer 400 can be seen Sunday at 4 p.m. ET on NBC.

The Fantasy Live picks were in a slump but bounced back nicely at Pocono. Hopefully you did not follow my advice on Twitter and put Denny Hamlin in the Garage Sunday. If you used the original lineup, you nearly had a perfect lineup and likely won your league. I replaced Hamlin with Aric Almirola but still scored well. The picks are beating 99.4% of the competition this season. Not too bad.

Here are my picks for the Big Machine Hand Sanitizer 400 ….

Kevin Harvick: I hate only having 3 allocations left with Kevin Harvick but there is no way I can leave him on the bench this week. Last year Harvick led 118 of the 160 laps and won this race by 6.18 seconds. Harvick had the best car at Pocono and he will be the fastest Sunday. Since joining Stewart-Haas Racing in 2014, Harvick has finished 1st, 4th, 6th, 6th, 3rd and 8th at Indianapolis (4th place average finishing position). This track is important to the Boss Man (Tony Stewart). He will make sure Harvick has a car to win Sunday.

Denny Hamlin: Denny Hamlin is having a career season and he is the most consistent driver in the sport in 2020. Hamlin has a series-high 4 wins, and a 2nd-place average finishing position in the last 4 races. That is red hot. Hamlin could have easily won both races at Pocono and he should have a great chance to “kiss the brick” Sunday. He has finished 5 of his last 6 races at Indianapolis in the top 6. I will ride the hot hand with Hamlin this weekend.

Joey Logano: Joey Logano is almost a lock for a top 10 finish Sunday. He has finished 2nd, 13th, 4th, 7th, 2nd, 5th and 8th at Indianapolis since joining Team Penske in 2013 (That is a 5th-place average finishing position). Logano won Stage 1, finished 4th in Stage 2, led 11 laps and finished 2nd at the Brickyard last year. He starts on the pole and should have a good chance to score a lot of Stage points and finish in the top 5.

Brad Keselowski: The No. 2 car should be the third-best car in the race, behind the No. 4 and No. 11 cars. Brad Keselowski won the race at the Brickyard in 2018 and finished 2nd in 2017. Keselowski was running 6th in the race last year when he got into the side of Erik Jone’s car and ruined his race. I expect Keselowski to spend a lot of time in the top-10 Sunday so he will be a great insurance policy to have on our team.

Aric Almirola: Denny Hamlin has been the best driver in the sport over the last 4 races but do you know who No. 2 is? Aric Almirola. The No. 10 car finished 5th (Homestead), 3rd (Talladega), 3rd (Pocono) and 5th (Pocono). Almirola’s speed from Pocono should translate into speed Sunday. Last year he was top 5 in all of the practices at Indianapolis and a light stand fell on his car before the race. His team tried to fix the damage. Almirola was still able to finish 14th after starting the race in a hole. He should be a lot better this week.

Ryan Blaney: Ryan Blaney had the 2nd-best car to Kevin Harvick at Indianapolis last year. He finished 4th in Stage 1 and 3rd in Stage 2. Fuel strategy caused Blaney to finish 7th in the race. The No. 12 team is running better in 2020 than they were last season. I expect the No. 12 car to have some serious speed Sunday. His results at Pocono were not great but Blaney had the 6th best Green Flag Speed, scored 24 Stages points and led 21 laps. I will start Blaney in the Garage but will not hesitate to put him in the race if he is running up front.

* I know you are probably worried about allocations. I HAVE A PLAN. I mapped out all of the drivers for their best tracks so let the competition sit the best drivers on the bench. We will use them, take the points and still be able to find good picks for the other tracks.

I you are really worried about allocations… Use Clint Bowyer over Brad Keselowski and Jimmie Johnson over Ryan Blaney.