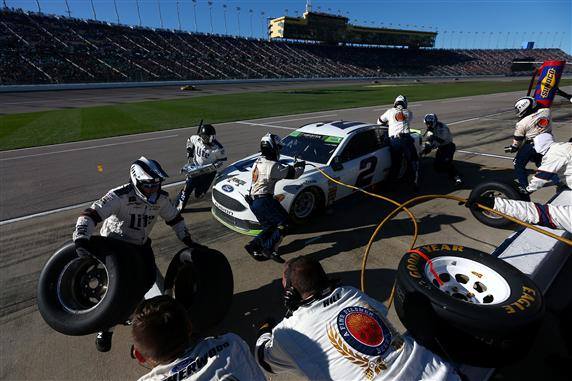 The Monster Energy NASCAR Cup Series will travel to Kansas Speedway this week to compete in the Digital Ally 400. Racing under the lights is always the best in my opinion. The cars will be lightning fast in the 2019 aero package. This should be a fun race to watch. The Digital Ally 400 is schedule to start at 7:30 p.m. ET on Fox Sports 1.

Kevin Harvick (5): Should we use Harvick this week? He won this race last year and the No. 4 team brought a fast car back to the track for the race Saturday night. Harvick had the fastest car that did not make a qualifying run in the morning practice, 4th fastest in final practice and he was fastest on the 10-lap, 15-lap and 20-lap speed charts. Oh…and he starts from the pole. You do not need to be a Fantasy NASCAR expert to know Harvick is a great pick this week.

Martin Truex Jr. (7): I would not be surprised if the No. 19 car was in Victory Lane again Saturday night. Cole Pearn said that he was not concerned about the practice speed chart because they were building their car to be fast at night. I have seen them use this strategy a lot before and usually they struggle at the beginning of the race and dominate once the sun goes down. That is what I expect from Truex this week. I will use another allocation with him.

Chase Elliott (8): Elliott said after the race last week, “I will not what we have this season once we get to Kansas.” Well it looks like the No. 9 car is going to be good. Elliott was 6th fastest in final practice with the 6th-fastest 10-lap speed. Elliott won the last race at Kansas. He should have a good chance to do it again. I expect the No. 9 car to spend a lot of time in the top 10, score a lot of Stage points and finish in the top 5.

Brad Keselowski (5): Keselowski has been flying under the radar this week. Fox Sports did not talk much about him in practice and he was not discussed much in qualifying. He is good at sneaking up on people and winning races. I have the feeling this is one of those weeks. Keselowski tested this tire package earlier this week at Chicagoland Speedway. He should know how the tire wears in the race. I will use another allocation with the No. 2 car Saturday night.

Aric Almirola (6): Almirola has been Mr. Consistent on the 1.5-mile tracks. He has finished the last 8 races on the intermediate tracks in the top 10. It looks like he will extend his streak after the race Saturday night. Almirola was fastest in the morning practice, 9th fastest in final practice and he had the 2nd fastest 10-lap, 15-lap and 20-lap average speed. This is a great race to use an allocation with Almirola.

My Garage Driver this week will be Clint Bowyer. How cool would it be to see Bowyer win at his home track? If he does, he many miss the All-Star Race because he will still be hung over. Kansas has not been good to Bowyer but his car is fast and he has performed well on the 1.5-mile tracks this season. I will have Bowyer in the garage just in case his luck changes.