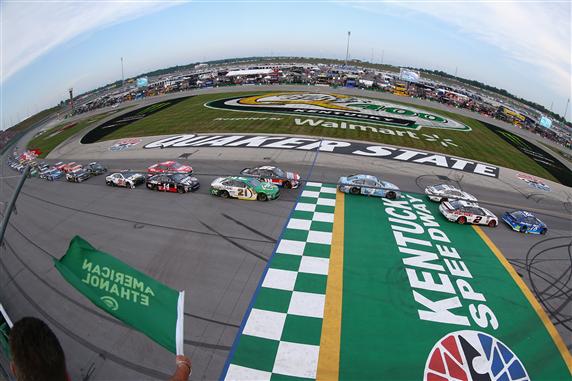 The NASCAR Cup Series travels to Kentucky Speedway this week. This will be the first of three consecutive races on the 1.5-mile tracks (Texas and Kansas follow the All-Star race next week). Once again there will not be any practice or qualifying for this race. The last time the Cup Series competed on a 1.5-mile tri-oval track with similar banking to Kentucky was in February at Las Vegas. That was a long time ago, so I am going to play it safe this week and use some of the mid-tier drivers who start in the top 10 and save my top picks (Kevin Harvick, Denny Hamlin, Chase Elliott and Brad Keselowski) for the races at Texas and Kansas.

The Fantasy Live picks were just about to hit the jackpot last week when it all went crashing into the wall with 12 laps left in the race. Denny Hamlin was running 1st, Kevin Harvick 2nd, Aric Almirola was 4th, Brad Keselowski was 6th and Joey Logano was 10th. I really thought the race at Indy would put us back at the top of our league standings. The picks are still beating 99.7% of the competition so that is not too bad. I have a plan to get us to the top so be patient… LOL

Kyle Busch: Should we trust Kyle Busch this week? The stats suggest he is a lock for a top-four finish Sunday. Busch has competed in nine races at Kentucky and his average finishing position is 4th. He has two wins and two runner-up finishes. Busch also has never finished worse than 3rd in any Stage at Kentucky. Busch “should” be a safe pick Sunday.

Joey Logano: The most similar track to Kentucky is Las Vegas. Both tracks are tri-ovals with nearly the same banking. Joey Logano won in Sin City earlier this year but hasn’t been the same since on the 1.5-mile tracks. He should get back to normal this week. Logano had this race won last year but a late race caution killed his four second lead. Logano also has crew chief with the most wins at Kentucky (Paul Wolfe) calling the shots. This should be a good race to use an allocation with Logano.

Aric Almirola: Aric Almirola is on fire right now. He has five consecutive finishes in the top five and those were on some of his worst tracks. Now Almirola gets to compete at where has had a lot of success at in the No. 10 car for Stewart-Hass Racing. I am a believer in momentum in Fantasy NASCAR so I will play the hot had with Almirola this week. I am not worried about running out of allocations with the No. 10 car before the playoffs begin.

Kurt Busch: Kentucky has been a very good track for Chip Ganassi Racing. Kyle Larson and Kurt Busch have combined for five finishes in the top-10 in their last six starts at Kentucky. Busch is going to be the popular pick this week so even if he doesn’t run well it will not hurt us because everyone else will have him too. Busch starts 7th so he has the track position to score a lot of Stage point and should be able to finish in the top 10 this week.

Matt DiBenedetto: This is a good week to take a chance with Matt DiBenedetto. He starts 10th and should have a good chance to finish in the top 10. Paul Menard started 14th, finished 10th in Stage 1, 9th in Stage 2 and finished 11th in the race at Kentucky last year. DiBenedetto has been able to get a lot more out of the car than Menard ever did. The most similar track to Kentucky is Las Vegas and DiBenedetto finished 2nd in that race earlier this season. I will roll the dice with the No. 21 car Sunday.

Erik Jones: Erik Jones has been a boom or bust pick this season. He either finishes in the top 10 or crashes out of the race. Kentucky is a pretty easy track for drivers to navigate so I do not expect many problems for the No. 20 team Sunday. Jones has competed in three races at Kentucky in the Cup Series and he finished 3rd, 7th and 6th. He starts 16th so I will have Jones in the Garage as an insurance policy this week.