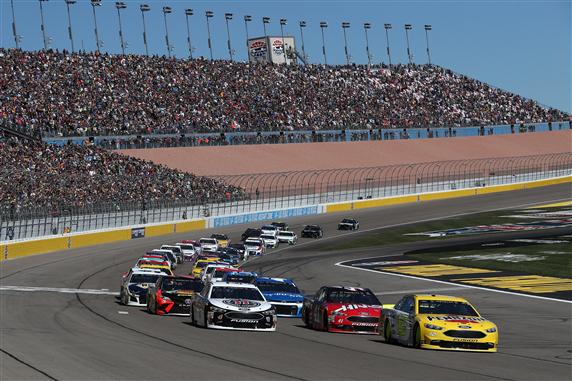 It is time for NASCAR to pack up the haulers and head out west for three weeks of racing. The first stop is in Sin City for the Pennzoil 400. This will be the first race of the season with the full 2019 rules package. That means it will likely be more unpredictable from what we have seen in the past at Las Vegas.  The race can be seen Sunday at 2:30 p.m. ET on Fox.

The FantasyRacingTips picks are performing well once again in Fantasy Live. The picks are beating 96.9% of the competition. We need to keep the pedal to the medal so we can score as many points as possible before the series returns to the east coast for some short track racing. The picks I have for Las Vegas should score a lot of Stage points and set us up to be inside the top 1K after 3 races.

Qualifying was interesting to say the least. The cars will be lineup based on where they were in the draft and not the speed in their cars. There are some fast cars starting in the back and some slow cars starting up front. I expect the cream to rise to the top so my strategy will be to play my best drivers despite where they start the in the field.

Kevin Harvick (9): Harvick won his first pole at Las Vegas and the track position and No. 1 pit stall will be a huge advantage Sunday. Harvick led 214 of the 267 laps in this race last year and he should be one of the dominators this week. The No. 4 car looked horrible in practice but his long-run speed was not bad. We have a Garage Driver so if he struggles I will take him out.

Kyle Busch (10): Busch has a lot going for him at his home track. He will compete in all three series of races this weekend and that should be an advantage. The MENCS are much closer in speed and downforce as the Xfinity Series cars and the Trucks. Busch qualified 3rd so he will have great track position to start the race and a premium pit stall. Busch should score a lot of Stage points and compete for the win Sunday.

Brad Keselowski (10): Keselowski is already locked into the playoffs so he can gamble for track position. Keselowski has finished 7 consecutive races in the desert in the top 7, including wins in 3 of the last 6 races at the track. The draft will come into play Sunday and Keselowski is great at manipulating the air to get to the front. I am not too worried about his 19th-place starting position. Keselowski will be in the top 10 before the end of Stage 1. This is one of the best tracks for the No. 2 car so I will use an alloction with Keselowski Sunday.

Joey Logano (10): Logno has been the most consistent driver on the 1.5-mile tracks since the race at Las Vegas last September. Logano qualified 10th and he has a lot of slow cars in front of him. The Team Penske drivers looked slow in practice last week and showed up with fast cars in the race. I expect the same Sunday. I expect Logano to quickly make his way into the top 5 and score a lot of Stage points. He has not finished outside the top 10 at Las Vegas since 2013. I doubt he will finish outside the top 10 this week.

Ryan Blaney (9): Blaney has a 5.75 average finishing position since 2015 at Las Vegas. He probably would have had a chance to win the pole if normal qualifying was in affect at the track. Blaney will start 13th and he should finish in the top 10.  Blaney will be in a good position to win if this race does come down to a drafting contest. He is one of the best young drivers at moving through the draft to make it to the front. I will take a chance with Blaney at his best 1.5-mile track.

My Garage Driver will be Austin Dillon (10): Dillon looked fast in the test session at Las Vegas and the No. 3 team unloaded with a lot of speed Friday. Dillon had the fastest car in qualifying but could not keep up with the cars in the draft. He qualified 4th and he has the speed to keep his car up front and score Stage points. The MENCS and Xfinity Series cars are similar this year so the extra seat time in the Xfinity Series race should help him this week.

* We are in Las Vegas so I am hedging my bet for the winning manufacturer. It should be Kyle Busch or a Ford in Victory Lane so I will go with Busch for the win and Ford for the manufacturer to ensure we get some bonus points.