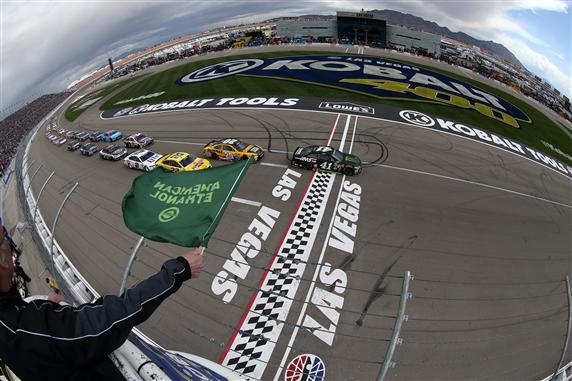 The Monster Energy NASCAR Cup Series will compete this week in Las Vegas, Nevada. The race can be seen Sunday at 3:30 p.m. ET on Fox. Be sure to test your knowledge of NASCAR by competing in the Fantasy Live game on nascar.com.

My Fantasy Live picks bounced back nicely last week after a rough start in the Daytona 500. My picks scored 353 points, but were on pace for a lot more until Kevin Harvick was tagged with a speeding penalty and Clint Bowyer got a flat tire. Better luck will come my way soon.

There were 325 laps in the race at Atlanta and 267 in the race this week at Las Vegas. That means there will be 58 fewer points available for dominator drivers (drivers who lead the most laps and run the fastest laps… example: Kevin Harvick last week).

The last three races in Sin City have shown a trend. Either Kevin Harvick dominates the race (The No. 4 car led 142 laps and won the race in 2015) or the laps are spread evenly by four or five drivers (That is what happened in 2014 and 2016). After practice Saturday we will have an idea how strong the No. 4 car is. If Harvick looks like he did last week then the best strategy will be to take Harvick and the rest of the drivers should be drivers who can earn position differential points.

There are four other drivers who have been the dominator drivers when Harvick did not lead the most laps. Brad Keselowski, Joey Logano, Jimmie Johnson and Kyle Busch have led 323 laps the last two races at Las Vegas. There is a good chance that one or two of these drivers will dominate the race if Harvick does not.

I have been asked a lot the last two weeks how the new scoring format for Fantasy Live would affect my picks for the game. Will I change my strategy since points are awarded for finishing each Stage in the top 10? The answer is no. NASCAR teams will be using different pit strategies to earn Stage points. It is impossible to tell what each team’s strategy will be. My suggestion is to not chase the Stage points. Just try to pick the best team you can and if your drivers earn Stage points… congratulations!

Kevin Harvick ($28.00) could show us a reply of last week. It is obvious that Ford has an advantage early in the season and the No. 4 car seems to be dialed in. He won both Stages in the Daytona 500 and both Stages at Atlanta. So far Harvick has led 326 of the 525 laps (62%) this season. With the race at Phoenix coming up after Las Vegas, I see no reason to sell him now.

Joey Logano ($27.75) may be one of the drivers I try to fit into my lineup this week. Logano has not won at Las Vegas but he has been the second best fantasy driver behind Kevin Harvick the last three seasons. Last week Brad Keselowski and Harvick said they benefitted from running the Xfinity race on Saturday because they learned so much about the tires. Logano will run the Xfinity race this weekend and should earn the same benefit.

Brad Keselowski ($27.00) has won two of the last three races at Las Vegas. Now that Keselowski has a win the No. 2 team can take more chances. I expect crew chief Paul Wolfe to get creative this week and find a way to get the Blue Deuce to the front. Keselowski may not lead as many laps as Kevin Harvick or Joey Logano, but he should have a better chance to win the race.

Jimmie Johnson ($27.00) has been very consistent at Las Vegas. He has finished four of the last five races at the track in the top six. The No. 48 car would have been a lot better last week if he did not have two speeding penalties. The No. 48 team admitted that they setup the digital reading wrongs to indicate pit road speed. I am sure they will get that fixed and Johnson will bounce back at the track he has four wins at.

Kurt Busch ($23.00) is second in the point standings and his hot start to the 2017 season should continue this week. Busch has never won at his home track but that could change this week. The Stewart-Haas Racing Fords have been fast and his crew chief (Tony Gibson) is good at mapping out a strategy for the race. I still have Busch on my team from last week and I just might give him another run at Las Vegas.

Clint Bowyer ($15.50) is on my team and he is not going anywhere anytime soon. He was the best bargain to start the season and it will not be long before his price climbs over $20. Atlanta was actually one of the worst tracks for Bowyer and he was running in the top four when his tire went down. Hopefully he continues to qualify poorly and finish in the top 10.

Ty Dillon ($12.25) is going to be a great value pick until his price climbs over $15. What we saw from Dillon last week is about what we can expect from him this season. He qualified 26th and finished 15th. Dillon should also benefit from driving the Xfinity race Saturday. If you did not get Clint Bowyer when he was cheap, then it may be a good idea to grab Dillon before his price climbs too high.

David Ragan ($6.00) was a great value pick for my team last week. He qualified 34th and finished 23rd. Ragan looks a lot better this season than he did last year. The switch to Front Row Motorsports really helped him out. It also helps that the team has full support of Roush Fenway Racing. Ragan will be my cheap driver for the near future.

Here are my pre-qualifying picks for the Kobalt 400: