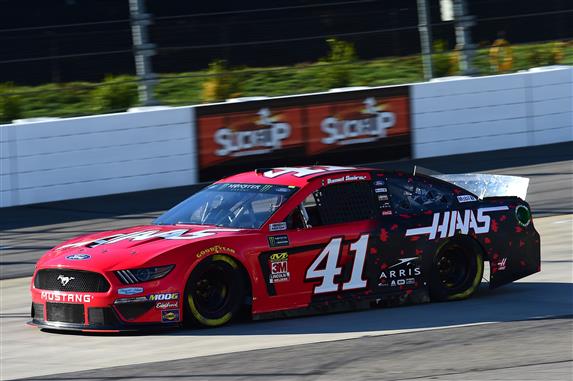 The Monster Energy NASCAR Cup Series will travel back to the east coast for some short-track racing at Martinsville Speedway. If any driver has a score to settle, it will happen at this track (Daniel Suarez vs. Michael McDowell or Joey Logano vs. Martin Truex Jr. comes to mind). Beating and banging is just part of the racing at this track. It should be exciting to watch. The STP 500 is scheduled for 2 p.m. ET on Fox Sports 1.

* NASCAR will inspect the cars Sunday morning at 8 a.m. ET. They should be complete by 10 a.m. ET. Any cars who fail inspection will lose their starting spot and start from the rear. Be sure to check back Sunday afternoon to see if I had to make any changes to my picks based on failed race inspection.

So far the Fantasy Live picks are performing well. We are climbed into the top 99% and now we need to stay there. The races should be more predictable now that the MENCS has used the new aero package at all types of tracks. The race Sunday comes down to which drivers can save their brakes and find the rhythm to get on and off the game at the right time to turn fast laps. The drivers who have had success in the past at Martinsville will be up front Sunday. These are the drivers we need in our lineup this week.

Martin Truex Jr. (9): Truex has never won at a short track but that could change this week. Truex has the car to beat. He posted the fastest 10-lap, 20-lap and 30-lap speed in final practice. Truex had a great chance to win the last race at Martinsville. I do not think he will be so kind Sunday.

Joey Logano (7): Logano dominated the last race at Martinsville last October and he should run well Sunday. Logano led 309 of the 500 laps in the last race at the paperclip shaped track. Logano had the 8th fastest car on the long runs in final practice. He qualified on the pole and track position is very important at this track. His No. 1 pit stall and No. 2 ranked pit crew should help him score a lot of Stages points and possibly win another Grandfather Clock Sunday.

Brad Keselowski (8): Keselowski could clean their clock Sunday. The No. 2 team focused on their long runs speed. Keselowski was 10th fastest on the 10-lap run speed chart and he told MRN radio, “We are fine. Our car really comes to use after 10 laps.” Keselowski has finished in the top 3 in 3 of the last 4 races this season and he has a 4.5 average finishing position in the last 6 races at Martinsville. Keselowski should score a lot of Stage points and finish in the top 5 Sunday.

Denny Hamlin (8). Hamlin spent a lot of time complaining about his car in practice. His lap times do not reflect his problems. Hamlin had the 6th fastest car on the long runs in final practice. He qualified 5th so he will have the track position to keep him up front at the start of the race. Hamlin finished both races at Martinsville in the top 7 last year. He should run near the top 5 again Sunday.

Clint Bowyer (8): Bowyer is a must start this week. Martinsville is by far his best track. Bowyer won the STP 500 last year and he should have a good chance to do it again. He said in practice that his car is good enough to win. Bowyer has the third-best driver rating in the last 3 races at Martinsville. This is a great race to use an allocation with the No. 14 car.

My Garage driver will be Kyle Busch (7): Busch has been the best driver in the MENCS this season. He has a 2.6 average finishing position through the first five races. I was planning on starting Busch in the race but then he went out and laid an egg in qualifying. Busch has not finished outside the top 5 at Martinsville since 2014 (7 races) so he is a great insurance policy to have on our team.

* I am hedging my bet this week with my Winning Manufacturer pick. Martin Truex Jr. had the fastest car in practice and he came one corner from winning his first short track race at Martinsville last year. He is my pick to win, but Ford has won 3 of the last 4 races at the track. I will pick Ford as my winning manufacturer so our chances of scoring bonus points increase.