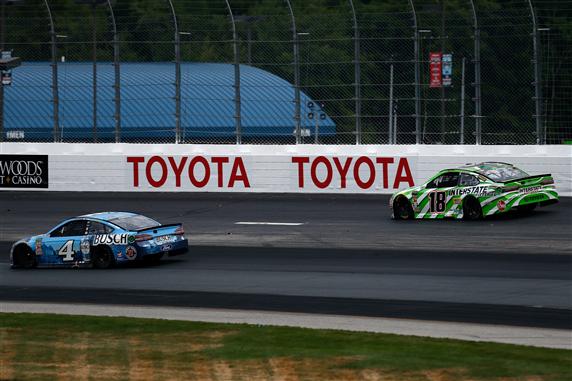 There are 7 races left in the regular season of the Fantasy Live game. I have all of my allocations mapped out for the rest of the season so we are using the best drivers at their best tracks. Saving allocations is important but some drivers perform better on the short tracks than they do on the larger ovals. We need to make sure we get these drivers into our lineups Sunday.

Kyle Busch (3): Busch has been a monster on the short tracks this season and he has been the best driver at New Hampshire over the last 3 seasons and he looks fast again this week. Busch posted the 3rd fastest speed in final practice with the 2nd fastest 10-lap average speed. The No. 18 car starts on the front row and they will have a premium pit stall Sunday. Busch will have a great chance to win the Foxwoods Resort Casino 400 so I will use another allocation with Busch this week.

Martin Truex Jr. (3): The Truex family has put the “Magic” into the “Magic Mile.” It seems like whenever the checkered flag is waived, the name Truex is on the car. That could be the case Sunday. Truex posted the 5th fastest speed in final practice with the 4th fastest 10-lap average speed. The No. 19 car has the speed to take home the Lobster Sunday.

Brad Keselowski (3): Jimmie Johnson said in an interview this week, “New Hampshire is like Martinsville on steroids. You need the same balance to get your car to turn through the flat corners and it takes the same driving techniques.” If that is the case, Keselowski should dominate this race. The No. 2 car led 446 of the 500 at Martinsville. Keselowski starts on the pole so he has track position, the No. 1 pit stall and speed to score a lot of Stage points and finish up front. I will use another allocation with Keselowski at the Magic Mile.

Ryan Blaney (5): Blaney has a history of running upfront at the Magic Mile. He finished 9th in 2017 and 7th last year. He has also scored Stage points in every Stage at the track. Blaney posted the fastest speed in final practice with the fastest 10-lap average speed. The No. 12 car will start 5th and track position is very important at New Hampshire. I will burn another allocation with Blaney this week.

Erik Jones (7): Jones has not been very good at New Hampshire in his career and he has not been good at the short tracks this season. So why is the No. 20 car in the lineup? Every driver in the garage said this aero package makes the Magic Mile a different race track. Also, it has been 3 months since the MENCS competed on a short track. Jones has more momentum now.  Jones posted the fastest speed in the morning practice and came back and posted the 12th fastest speed in final practice with the 9th fastest 10-lap average speed. He also qualified 4th. I will take a chance with the No. 20 car this week.

My Garage Driver this week will be Kyle Larson (7). Larson crashed his car in practice so he will start in the back. The good news is that Larson said his backup car is much better than their primary. He posted the 8th fastest speed in final practice with the 6th fastest 10-lap speed. Larson needs points so the No. 42 team will likely gamble to get track position and steal Stage points. Larson finished 2nd in both races at the Magic Mile in 2017. I have a feeling he will be up front again Sunday.