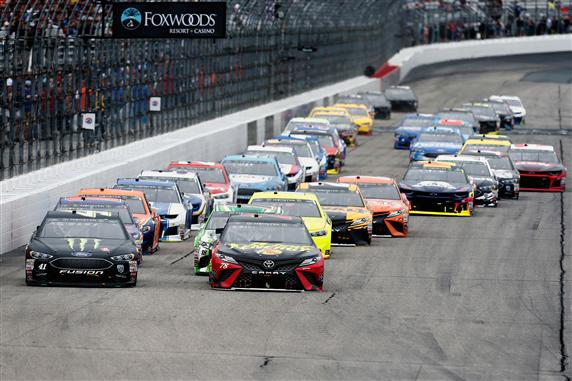 The NASCAR Cup Series will be back to short track racing this week at New Hampshire Motor Speedway. There are only seven races left in the season for Fantasy Live and two of them are at Daytona. We should be able to use some contrarian drivers at Daytona, so we have five races to use our top drivers. Do not be the person who ends the season with allocations left with Kevin Harvick or Denny Hamlin.

I used my top drivers at Kansas and the picks were running well until Joey Logano wrecked and his car scored me two points. The picks are still beating 99.2% of the competition so I cannot complain. I am using a lot of my top drivers again this week because I think we can get through the races at Michigan with Alex Bowman, Jimmie Johnson, Kurt Busch, Erik Jones and some other mid-tier drivers. I am not too worried about the races at Daytona. I will find value at those tracks. I have a plan for Dover too, so it is time to try and post a high score this week at the Magic Mile.

Here are my picks for the Foxwoods Resorts Casino 301 ….

Denny Hamlin: There is no doubt that Denny Hamlin has been the best driver for Joe Gibbs Racing this season. He has a series-high five trips to Victory Lane. New Hampshire is one of the best tracks for JGR so I would not be surprised to see Hamlin add win No. 6 to his 2020 resume this week. Hamlin finished second at the Magic Mile last year. Do not be afraid to use an allocation with Hamlin Sunday.

Kyle Busch: Kyle Busch would be my pick to win this week if this were a normal season. Busch has been good this season, but he has not been able to dominate the races like he has in the past. That could change Sunday. Busch has led a series-high 436 laps in his last four races at the Magic Mile. He is averaging 109 laps led and 15 Stage points per race at New Hampshire since 2016. Those stats are too good to ignore this week.

Joey Logano: What have you done for me lately Joey Logano? The No. 22 car started off the season on fire but has a 20th place average finishing position in the last eight races. All of those races have been using the 550 HP aero package. I expect Logano to run up front this week because he has been the best in the aero package they will use Sunday. Logano won at Phoenix in March and he led 93 laps and scored the second most fantasy points at Phoenix last November. Logano also led 224 laps and finished fourth at Martinsville in June. This should be a good race to get Logano back into our lineups.

Ryan Blaney: Ryan Blaney has been a beast on the 1.5-mile tracks and he should be just as good this week at New Hampshire. Blaney has finished 4th, 7th and 9th in his last three races at the Magic Mile. Some of the drivers have said that New Hampshire races like a large Martinsville. If that is true, Blaney will be very good Sunday. The No. 12 car finished 2nd at Martinsville and had one of the best cars in the field. Blaney should have a good chance to finish in the top-five Sunday.

Aric Almirola: I am going to ride the hot streak with Aric Almriola. The No. 10 car has finished eight races in a row in the top 10. Almirola has quietly finished 11/16 races in the top 10 this season. There is no guarantee that Almirola will stay this hot all year, so you should play him while he is finishing in the top-10. I will use another allocation with Almirola Sunday and if he stinks up the joint, I will put him in the Garage.

Martin Truex Jr.: Martin Truex Jr. has been the best short track driver since the beginning of the 2019 season. Truex has won four of the 10 races on the short tracks and finished second in another (Truex finished 1st or 2nd in 50% of his races). His 4.5 average finishing position at New Hampshire in the last four races at the track is a series best. Truex also averages 119 laps led in his last five races at the Magic Mile. That is also the best in the series. I want to save some allocations for Dover so I will start the No. 19 car in the Garage Sunday.