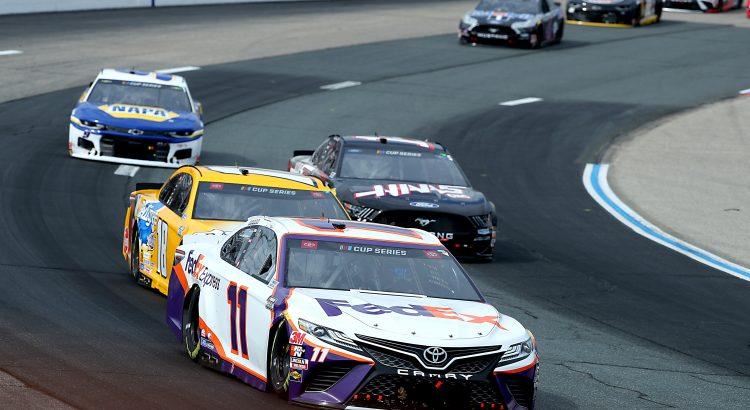 The Cup Series will compete at New Hampshire Motor Speedway. This will be the fourth race on a short, flat track in the 750 HP aero package (Phoenix, Martinsville and Richmond were the first three races). This should be an easy race to predict because the same drivers have run in the top-10 in all three races. I plan to build my lineup around these drivers this week. The Foxwoods Resort Casino 301 can be seen Sunday at 3:30 p.m. ET on NBCSN.

Here are my picks for Foxwoods Resort Casino 301…

Kyle Busch(2): Kyle Busch has not been great on the short, flat tracks this season, but he has been on a hot streak the last month so I cannot fade him when he starts on the pole. Busch finished 2nd (Pocono), 1st (Pocono), 3rd (Rod America) and 2nd (Atlanta) in his last four races. Joe Gibbs Racing has been the best team on the short, flat tracks this season so I will fill my Fantasy Live lineup with drivers from the JGR stable of cars.

Martin Truex Jr. (3): Martin Truex Jr. won at Phoenix and Martinsville and he finished 5th at Richmond. He averaged 64 laps led and 14 Stage points on the short, flat tracks this season. Truex should lead some more laps, finish each Stage in the top-10 and have a good chance to go to Victory Lane at the Magic Mile.

Christopher Bell (7): You cannot have too many Joe Gibbs Racing cars in your lineup Sunday. Christopher  Bell has been good on the short flat tracks this season. Bell finished 9th at Phoenix, 7th at Martinsville and 4th at Richmond this season. He will get a practice race since he is competing in the Xfinity Series race Saturday. That extra seat time should help Bell Sunday. The No. 20 car should finish in the top-10 again Sunday from the 9th position.

Alex Bowman (4): Richmond is a similar track to New Hampshire so why not play the driver who won the race at Richmond? Alex Bowman started 24th in that race and was able to find Victory Lane. Bowman won the last two short tracks races (Dover and Richmond) so I will take a chance with the No. 48 car again Sunday.

Garage Driver Chase Elliott (3): I have 3 allocations left with Chase Elliott and I need two of them for the road courses. I would like to save the other one for Michigan but I will have Elliott in my Garage just in case he runs up front Sunday. The track most similar to New Hampshire is Phoenix. Elliott won the championship race at Phoenix last year and finished 5th in March. I will have the No. 9 car as an insurance policy this week.

* If you have any allocations left with Denny Hamlin, use him in the starting lineup and move Christopher Bell to the Garage. This will take Chase Elliott out of your lineup.

** If you are out of allocations with Denny Hamlin (like I am) and you need another driver for your lineup, I would use William Byron, Brad Keselowski, or Kevin Harvick (In that order)