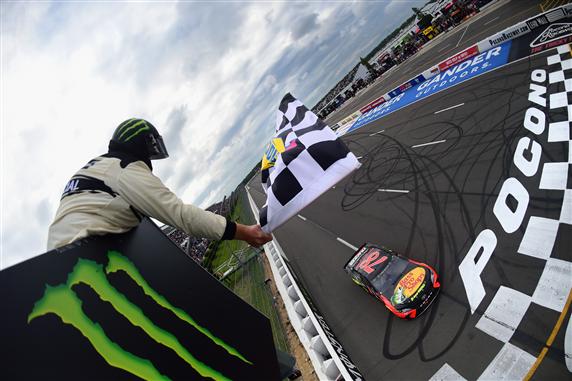 The Monster Energy NASCAR Cup Series will compete at the Tricky Triangle this week in the Pocono 400. The track will be even more “Tricky” with the 550 HP engine and higher downforce aero package. The race will be one of the hardest to predict because even the crew chiefs do not know how the 2019 cars will perform on the track. It should be a fun race to watch. The Pocono 400 can be seen Sunday at 2 p.m. ET on FS1.

Martin Truex Jr. (6): The No. 19 team is on quite the hot streak right now. Truex has won 3 of the last 5 races. He is also the defending race winner of the Pocono 400. The No. 19 car was 10th fastest in both practices but his speed is a bit misleading. Truex did not make a qualifying run in either practice. That is the reason why the No. 19 car will start deeper in the field, but Truex has won from the 13th and 14th starting positions in 2 of the last 3 races. I am not worried about his 20th starting position Sunday.

Brad Keselowski (4): Keselowski has been one of the most consistent drivers at Pocono. He has finished 6 of the last 7 races at the track in the top 5. That is awesome. The No. 2 car looked really fast on Friday. The car was so fast in the first practice that they decided to only work on qualifying runs in final practice. Keselowski has won 3 races this season and I would not be surprised to see him in Victory Lane again Sunday.

Chase Elliott (6): Elliott is another driver who is on a hot streak. He has finished the last 4 races in the top 5. His average finishing position since early April is 3.5. There is a good chance Elliott will finish in the top 3 again Sunday. The No. 9 car was one of the fastest cars on the long run in practice. Elliott has finished 4 of his 5 races at Pocono in the top 10. He should score a lot of Stage points and easily finish in the top 10 in the Pocono 400.

Denny Hamlin (6): Hamlin leads the series with 4 wins at Pocono but his last win was in 2010. The 2019 aero package will have downforce similar to what we saw the last time Hamlin was dominant at this track. Joe Gibbs Racing has won 8 of the 13 races this season so Hamlin should have a fast car. Hamlin really liked his car in practice. He was 6th fastest in the first practice, 11th in final practice (did not make a qualifying run) and he had the 8th-fastest 10-lap average speed. The No. 11 car will start 6th Sunday.  I will take a chance with Hamlin this week.

Kyle Larson (8): Larson is not the first driver people think of when they think of racing at the Tricky Triangle but he has been really good at the track. Larson finished 2nd in the Pocono 400 last year and he should be up front Sunday. Larson struggled in the first practice and the No. 42 team changed everything on the car. It worked. Larson posted the 3rd fastest lap with the 4th fastest 10-lap average speed in final practice. Larson is a hard driver to trust but I will have a great driver in the Garage just in case he runs into problems.

My Garage Driver this week will be Kyle Busch (4). I would love to Busch in my starting lineup but I want to save my allocation with him if it is possible. I cannot completely fade Busch though because there is a chance the No. 18 car completely dominates this race. If that is the case, I will move Busch into my starting lineup.