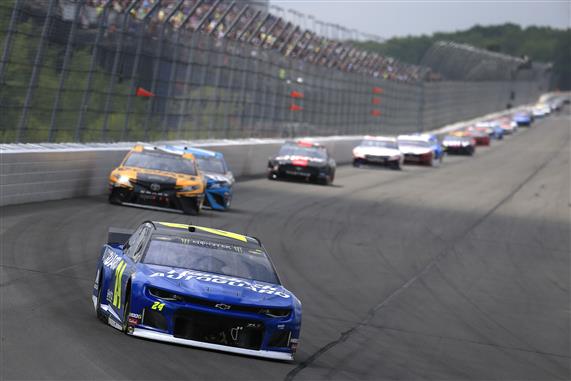 The MENCS competed at Pocono in June and it was not a very good race. Most of the drivers said after the race that passing was nearly impossible. To improve the racing Sunday, NASCAR decided to turn the Tricky Triangle into the Sticky Triangle. The PJ1 traction compound will be added to the tracks to help promote passing and leading changes. I hope it works. The Gander RV 400 can be seen Sunday at 3 p.m. ET on NBCSN.

There are 6 races left in the regular season of the Fantasy Live game. The race next week is on a road course so we can use some road course drivers to save some allocations. That leaves us 5 races to get through with our star drivers. I have my allocations mapped out for the final races. I made sure we are using the best drivers at their best tracks. It is time to make one more run to the top of our league standings before the regular season is complete.

* I am going to load my lineup with drivers who are on the playoff bubble and need points. Erik Jones, William Byron and Daniel Saurez will likely use pit strategy to gain track position and score a lot of Stage points.

Kevin Harvick (1): I wasn’t planning on using my last allocation with Harvick this week and then he goes out and wins the pole. Track position was HUGE in the June race at Pocono. Most of the drivers said it was nearly impossible to pass the leader. That is good news for the driver starting in the No. 1 position Sunday. I was saving my last start with Harvick for Bristol, but I will go ahead and burn it while he has the top qualifying position.

Denny Hamlin (3): Hamlin has been very good on the flat tracks this season. The No. 11 car will have another good chance to get to Victory Lane Sunday. Hamlin did not like his car in the first practice because the splitter kept hitting the track over the bumps in the tunnel turn. The team made a shock adjustment between the two practice sessions and Hamlin said the car “came to life.” Hamlin posted the 6th fastest speed in race-trim, with the 2nd fastest 10-lap average speed. I will use one of my last allocations with Hamlin this week.

Erik Jones (3): Pocono is a horsepower racetrack and Joe Gibbs Racing has the speed on the long front and back-stretches to pass a lot of cars. I do not mind having three of their cars in my lineup this week. Jones had the fastest car in final practice and he is my sleeper pick to win Sunday. Jones has 5 races on his MENCS resume. He finished 3rd, 5th, 29th (transmission failure), 8th and 3rd. Not too bad. I will use another allocation with the No. 20 car Sunday.

Daniel Suarez (9): If Suarez is going to win a race this season it will probably happen at Pocono. The track ranks as his 2nd best track on the schedule. Suarez has finished 3 of the last 4 races at the Tricky Triangle in the top 8. The No. 41 team needs points so they will likely stay out during the stages to score as many Stage points as possible. I will use an allocation with Suarez this week.

William Byron (10): Byron really looked good in practice. He posted the 4th fastest lap with the fastest 10-lap speed. Pocono is the 2nd-best track for Byron. He has 3 races at the Tricky Triangle on his MENCS resume. Byron finished 9th, 6th and 18th. Byron won the pole for the June race at Pocono and the No. 24 car finished 2nd in Stage 1, 3rd in Stage 2, led 25 laps and finished 9th. I expect a similar race from Byron Sunday.

My Garage Driver this week will be Kyle Busch (2). I really do not want to use Kevin Harvick and Kyle Busch in this race but I will do it if they score a lot of Stage points and are running No. 1 and No. 2 when it is time to make a decision on a garage driver. There are more tracks left on the schedule where I need Busch so he will start in the garage. I will have him on standby though if he starts to dominate the race Sunday.