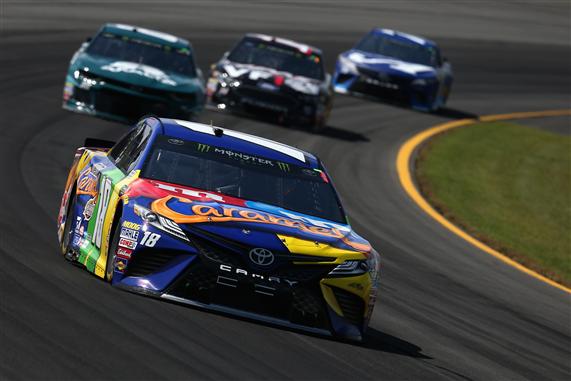 The NASCAR Cup Series travel to the Pocono Hills this weekend for a full slate of racing. There will be two Cup Series races, a Truck Series race, and Xfinity Series race and an ARCA Menards Series race. Hopefully Mother Nature does not decide to screw with NASCAR like she usually does at this track. The Pocono Organics 325 can be seen Saturday at 3:30 p.m. ET on Fox.

The Fantasy Live was performing well and then it was horrible in Homestead. Martin Truex Jr. and Kevin Harvick should have been locks for a top 5 finish and both drivers did not live up to expectations… and do not get me started on Jimmie Johnson. At least Denny Hamlin scored us a lot of points. The picks are still beating 99.4% of the entries so that is not too bad.

Here are my picks for the Pocono Organics 325 ….

Denny Hamlin: Denny Hamlin has a series-high 5 wins at Pocono. He also has 3 wins this season. Hamlin won the last race at Pocono and he should be a favorite to win again Saturday. Hamlin said after the race last year, “This aero package and the addition of the traction compound makes this track race like it did earlier in my career when I could not loose here. It just fits my driving style well and I am very confident I can win here.” Joe Gibbs Racing dominated this track last year and the No. 11 has been their best car in 2020. I expect Hamlin to have a great chance to win this race.

Kyle Busch: Kyle Busch would be my pick to win Saturday if this was a normal season, but 2020 is far from normal. The No. 18 team has found their way into the top 5 in 6 races this season but it takes Busch ¾ of the race to get his car right. Busch has won 3 of the last 5 races at Pocono. His average finishing position is 3rd over the last 3 seasons at this track. Busch should finish in the top 5 again Saturday.

Kevin Harvick: The stats suggest the No. 4 car will be in Victory Lane Saturday. Kevin Harvick leads the series in Green Flag Speed and Driver Ranking on the intermediate tracks this season. He also led the most laps in 2 of the last 4 races at Pocono and led the 2nd most laps in another race. Harvick has a 7th-place average finishing position at Pocono in his 12 races at the track in the Stewart-Haas Racing car. He has not won though and that is the reason why I have the No. 4 car finishing right behind the No. 11 Saturday.

Brad Keselowski: Brad Keselowski has not won at Pocono Raceway since 2011 but he has been very consistent. Keselowski has finished 8th, 2nd, 38th (Engine failure), 5th, 5th, 5th, 2nd, 3rd and 2nd in his last 9 races at the Tricky Triangle. The only thing that can stop the No. 2 car from finishing in the top 5 is a blown engine. I will take my chances with Keselowski  Saturday.

Ryan Blaney: Ryan Blaney won his first race in the Cup Series at Pocono in 2017. They say drivers never forget their first trip to Victory Lane. The No. 12 car has consistently been one of the fastest on the track in 2020. That is not going to change this weekend. Blaney has dominated the races in the 550 HP aero package over the last 2 months. He finished 1st, 3rd, 4th, 3rd and 3rd in his last 5 races in this package (Best average in the series). The No. 12 car also starts on the front row and has the No. 1 pit stall. I expect Blaney to score a lot of Stage points and finish up front Saturday.

Erik Jones: Pocono Raceway is a great track to use an allocation with Erik Jones. Joe Gibbs Racing dominated this track last year and it is one of the best tracks for Jones. He has competed in 6 races at the Tricky Triangle. Jones finished 2nd, 3rd, 5th, 29th (engine problems), 8th and 3rd. This is his second-best track (behind Darlington) so I will have him in the Garage Saturday.