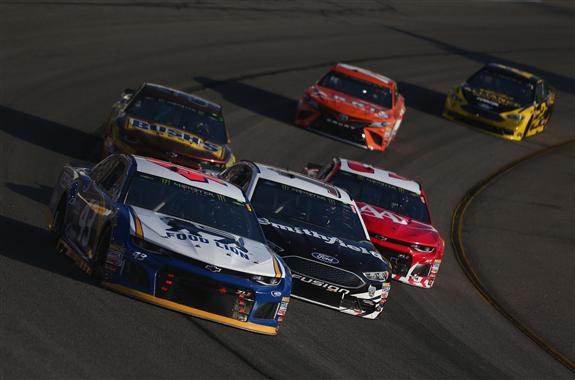 The MENCS Playoffs kicked off last week and so did the new game for Fantasy Live. I have dominated this game for 8 years but my picks got off to a horrible start in Las Vegas.

There was a conference call last week between many of the people who run Fantasy NASCAR sites and the people who run the Fantasy Live game. We discussed the game rules and our strategy for the game. The consensus strategy was to maximize your points in Round 1 of the MENCS Playoffs by using your Garage Pick for a Playoff Driver. As we get deeper into the playoffs the non-Playoff Drivers will be better picks for the garage. After arguing my side of “Having more bullets from the Non-Playoff Drivers to ensure 4 top-10 drivers”, I was convinced that having 3 Playoff Drivers on your team is the way to go.

My two Playoff Drivers this week will be Kevin Harvick and Martin Truex Jr. I thought about using Denny Hamlin but I do not trust him. I have been burned by the No. 11 car too many times. Harvick starts on the pole and Truex dominated the last race at Richmond. Both drivers should finish each Stage and the race in the top 5 Saturday night.

My two Non-Playoff Drivers are Daniel Suarez and Ryan Newman. Both drivers know they are out of their current cars at the end of the season. We know Newman is going to the No. 6 car so he must feel like a huge weight was lifted off of him. Performing well in the playoffs will help Suarez secure a seat for the 2019 season. Both drivers have a history of running well at Richmond and both have stepped up their game since it was reported that they were looking for a new place to drive. These two drivers still have something to race for.

My Garage Driver this week is Kyle Busch. He has a series-high 5 wins at Richmond, including the last race. He starts 12th and should quickly make his way into the top 5. I would not be surprised if Busch was in Victory Lane Saturday night.