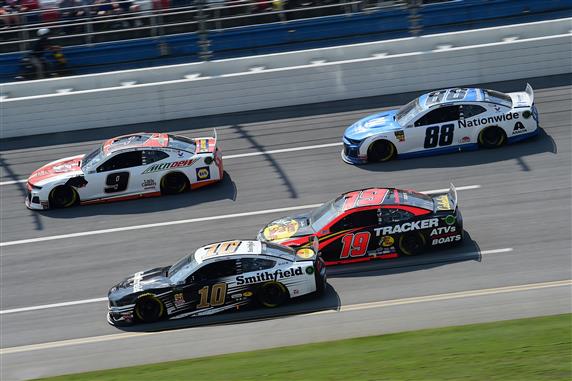 There are only six races left in the Cup Series season. The Fantasy Live picks beat 99.7% of the entries in the regular season and we need some luck at Talladega if we want to continue to climb in the standings. The first race at Talladega was pretty calm. I do not expect that to happen this week since there is so much on the line. If you like chaos, this is the race for you. The YellaWood 500 can be seen Sunday at 2 p.m. ET on NBC.

The Fantasy Live picks were rolling right along. The drivers scored a lot of Stage points once we put Joey Logano in the Garage. Then Jimmie Johnson got a flat tire and brought out the caution. Most of my drivers were caught a lap down since they just left pit road. The lineup still bounced back but we lost some positions in the overall rankings. We will need some luck this week in order to gain our points back.

* I am hedging my bet and picking Ford as the winning manufacturer, although I have Denny Hamlin winning the race. There are more Fords then Toyotas in the race so I want more chances to score the bonus points.

Denny Hamlin: Denny Hamlin was on fire this year and then he went into a slight slump in the first round of the playoffs. We now know that Hamlin had a lot on his mind since he was about to release the news about his new race team. He bounced back with a dominant performance at Las Vegas and he should be the favorite to win Sunday. The No. 11 car finished three of the last four races at Talladega in the top four. Hamlin has also been the best driver on the Superspeedways this year. He finished 1st, 4th and 3rd in the three races. Hamlin should score a lot of Stage points and be a threat to win the race from the pole position.

Joey Logano: Joey Logano has a series-best Driver Rating and a series-best average finishing position at the Superspeedways since 2016. His average finishing position in his last six races at the track is 7th. Not too bad. Logano currently sits 10 points above the cut line for the Round of 8. He needs points so he will do his best to keep the No. 22 car up front and score as many Stage points as possible. I would not be surprised if Logano wins the race Sunday.

Ryan Blaney: Ryan Blaney has been the second-best driver at the Superspeedways behind Denny Hamlin. Blaney won this race last year and he has been blistering hot on the Superspeedways in 2020. He finished 2nd in the Daytona 500, won the race at Talladega in June and finished 6th at Daytona in August. He should be battling Hamlin for the win Sunday.

Aric Almirola: Aric Almirola is one of the safest drivers in the field this week. What he has done at Talladega since 2015 is simply amazing. Amirola has finished 3rd, 4th, 9th, 1st, 7th, 5th, 4th and 8th at Talladega over the last five seasons. That is a 5th-place average finishing position. This race is very unpredictable but Almirola is the safest pick for a top-10 finish this week.

Alex Bowman: I like using drivers who have momentum and Alex Bowman is running well right now. He has finished five of his last six races in the top-10. Bowman also has a hot streak going on the Superspeedways. He finished 7th at Talladega in June and 7th at Daytona in August. Bowman starts on the second row and I am sure he will fight like hell to keep his track position so he can score as many Stage points as possible. Bowman currently sits nine points above Kyle Busch for the final spot in the Round of 8.

Garage Driver: Ricky Stenhouse Jr. has finished 2nd, 9th, 25th, 3rd and 5th in his last five races at Talladaga. He nearly won the race at this track in June. I would not be surprised if he played the role of spoiler and won the race Sunday. I will start him in the Garage and if Stenhouse goes to the front and scores a lot of Stage points, I will put him in the race.