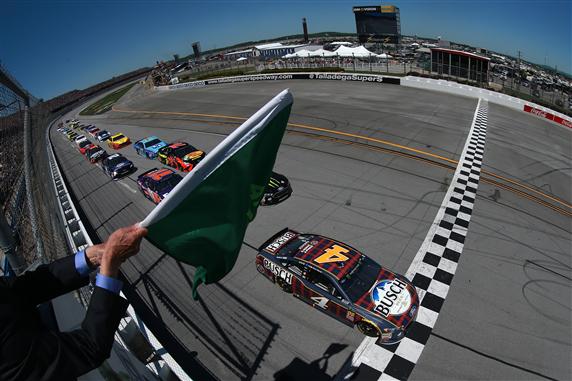 It will be back to Superspeedway racing for the Cup Series this week. I mapped out all of my drivers for their best tracks before the season started. There are 26 races in the Fantasy Live season. We must find some value picks for the races at Daytona, Talladega and the six road courses. I will be fading most of the top drivers this week even though some of them are very good at Talladega.

* Denny Hamlin is the best pick in the field this week but it is risky to put all of your eggs in the No. 11 basket. For that reason I will be hedging my picks this week. I will pick Hamlin to win the race, Hendrick as my winning team and Ford as my winning manufacturer. That will give me bonus points if Denny Hamlin, Chase Elliott, Alex Bowman, William Byron, Kyle Larson, Joey Logano, Brad Keselowski, Ryan Blaney, Kevin Harvick, Ryan Newman, Matt DiBenedetto, Chris Buescher or Michael McDowell wins the race.

Ryan Blaney (8): Ryan Blaney is my second favorite pick in his race behind Denny Hamlin. Blaney has won two of the last three races at Talladega and he has scored Stage points in every Stage but one in the last two seasons. Blaney should run up front, score a lot of Stage points and battle Hamlin for the win Sunday.

William Byron (10): William Byron has been on fire this year and his hot streak should continue Sunday. Byron has finished the last seven races this season in the top-eight. He also knows his way to Victory Lane on the Superspeedways. Byron won the race at Daytona last year and he was really good at Talladega too. The No. 24 car finished 11th in the first race and 4th last October at Talladega. He also scored Stage points in three of the four Stages and led laps in both races. Byron will have his teammates lined up right behind him at the start of the race. I would not be surprised to see the No. 24 car in Victory Lane Sunday.

Alex Bowman (8): Alex Bowman has been excellent at Talladega in the spring and horrible in October. Bowman finished 7th, 2nd and 8th at Talladega in the current aero package in the spring. He finished 14th, 37th and 33rd in the fall. I am not sure what the difference is in the races, but the numbers do not lie. Bowman will start the race sandwiched between his teammates (William Byron and Chase Elliott). I expect the three Hendrick Motorsports cars to work well together Sunday.

Aric Almirola (10): Aric Almirola has been very consistent at but his has had no luck this year. He started to turn his season around over the last two weeks. Almirola finished 37th at Talladega last October but he was on fire at this track before that race. He finished 3rd, 4th, 9th, 1st, 7th, 5th, 4th and 8th in his eight previous races. He is pretty good at this track. I will roll the dice with the No. 10 car Sunday.

Ricky Stenhouse Jr. (9): Ricky Stenhouse Jr. is a boom or bust driver at Talladega. He is either going to finish in the top five or crash out of the race. Thank goodness we have a Garage driver to replace Stenhouse if he crashes. Stenhouse likes to run up front and that means he should score a lot of Stage points. If he can stay out of trouble, Stenhouse should be one of the top drivers Sunday.

Garage Driver Kurt Busch (10): Kurt Busch will be my insurance policy in the Garage Sunday. Busch has the same trend going at Talladega that Alex Bowman has. Busch is really good in the spring and not so good in the fall. Busch has finished 9th, 6th, 2nd 6th and 8th in the last five spring races. I think the pressure of advancing in the playoffs is the reason why Busch does not run well in the fall. He should stay out of trouble and make his way to the front at the end of the race Sunday.