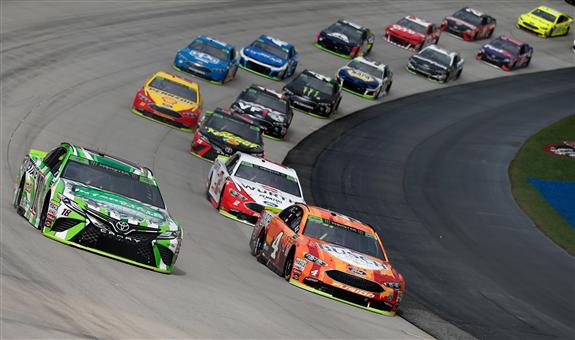 The second round of the MENCS playoffs will take the green flag at Dover International Raceway. There are 12 drivers competing for the championship and that means we have 4 more drivers to choose from in the Non-Playoff Driver category. That will make selecting our teams a lot easier. The Drydene 400 can be seen Sunday at 2:30 p.m. ET on NBC Sports Network.

Dover is a rhythm race track. Crew chiefs need to know how to set up a car to roll through the corners and the drivers need to know the rhythm to get on and off the gas pedal. Some teams are better at this track than others so I expect the same drivers who dominated the Monster Mile in the past to be the drivers up front Sunday.

Since I feel comfortable with the Playoffs Drivers finishing up front, I am selecting a Non-Playoff Driver for the Garage spot. These drivers have not been able to finish up front consistently and that is why they are eliminated from the playoffs. I like to have an extra driver to choose from in the Non-Playoff Driver category so that will be my strategy Sunday.

Here are my picks for the race in Dover….

Kevin Harvick: Harvick has been running well for the past month and I expect the No. 4 car to have a good chance to win the race Sunday. Harvick has a 3.6 average finishing position in the last 3 races at Dover and he enters the race with a 3.2 average finishing position in his last 4 races this season. Harvick posted the 3rd fastest speed in final practice with the fastest 15 and 20-lap average speed.

Martin Truex Jr.: The No. 78 car won the last race at Dover and Truex will have a good chance to win again Sunday. Truex posted the 2nd fastest speed in final practice and his car had top 6 long-run speed. I expect Truex to score a lot of Stage points, lead a lot of laps and finish in the top 3 Sunday.

Jimmie Johnson: Johnson has 11 wins at Dover and he will have a good chance to add another Miles the Monster Trophy to his collection Sunday. Johnson posted the 2nd fastest 5 and 10 lap average speeds in final practice and he was 3rd fastest on the 15 and 20-lap speed chart. I expect the No. 48 car to score a lot of Stage points and finish in the top 10 Sunday.

Kurt Busch: I could not believe how bad Busch ran in the first round of the playoffs. I had him picked for the final four in Homestead. I do not expect the No. 1 team to quit. Busch said the way he runs in these last 7 races will determine if he will return to Chip Ganassi Racing in 2020. Busch posted the 10th fastest speed in final practice with the 7th fastest 10-lap average speed. I like Busch in the spoiler position. I expect him to run well Sunday.

Erik Jones: Jones is another driver who was a surprise in the first round of the playoffs. The No. 20 team still has a lot to prove this season. Jones always runs well on the high-banked concrete tracks and he just won at Darlington (High-banked track). Jones posted the 12th fastest speed in final practice but the Joe Gibbs Racing cars usually race better than they practice and qualify. I like having Jones as a backup to Jimmie Johnson and Kurt Busch.