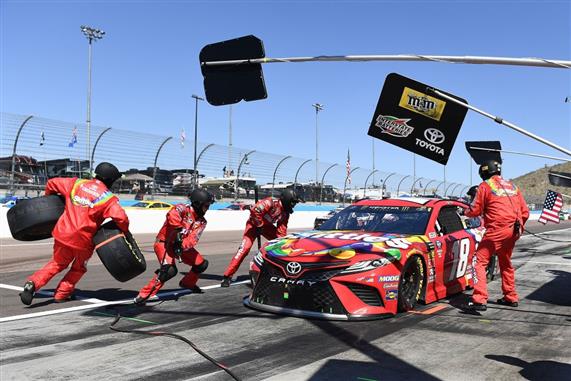 Here are my picks for the race in Phoenix….

Denny Hamlin: Hamlin has a great chance to win Sunday and he is everyone in the garage thinks Hamlin can win too. Hamlin blew away the field in final practice. Hamlin was fastest on the 10-lap, 15-lap and 20-lap average speed charts. The No. 11 car kept getting faster throughout a run while the other cars lost speed. Hamlin is 20 points behind Joey Logano for the final playoff spot so he will most likely need to win Sunday in order to advance to the championship race. It looks like Joe Gibbs Racing gave Hamlin the car to get the job done Sunday.

Kyle Busch: Busch looks like he is in position to dominate another race at Phoenis. He won the pole and now he has the No. 1 pit stall and the track position to run his race. He is 22 points above the cut line for the transfer spot to Homestead so the No. 18 team will be looking for Stage points and a top 5 finish Sunday so they can race for the championship next week. Busch said his strategy is to, “stay in front of the No. 22 car.” (Joey Logano is his competition for a transfer spot on points if Denny Hamlin wins). Busch won the last two races at Phoenix so he should be fast enough to run in the top 5 all race long. There is no reason to leave Busch off your team this week.

Clint Bowyer: Bowyer looks like he has one of the fastest cars from the Non-Playoff Drivers. Bowyer posted the 14th fastest speed in final practice but the car is built for the long runs. Bowyer was 7th fastest on the 10-lap average speed chart. Bowyer finished 11th at Phoenix in March and he finished 3rd and 8th in the 2 races at Richmond this year. He has been at his best on the short, flat tracks so I will use the No. 14 car in my lineup Sunday.

Kurt Busch: Busch had a horrible start to the playoffs but he started to get his groove back over the last month. Busch finished the last 3 races in the top 9. The No. 1 team spent a lot of time in practice working on setups for Kyle Larson, but I still expect Busch to run in the top 10 Sunday. He qualified 16th and finished 7th at Phoenix in March. Busch should have a similar race this week.

Joey Logano: I thought about putting Ryan Blaney in the Garage but there is a lot of pressure on the drivers in this race. Logano has dealt with the pressure before and went to Victory Lane in 2016. Blaney is still young and I am afraid he may make a mistake Sunday. Logano posted the 7th fastest speed in final practice with the 5th-fastest long-run speed. The No. 22 car starts on the front row so Logano is in a great position to score a lot of Stage points and finish in the top 5 Sunday.