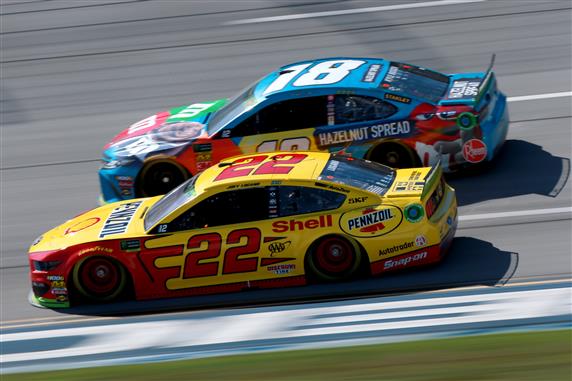 The MENCS returns to the Talladega Superspeedway for the second race in the Round of 12 of the playoffs. The drivers are all scared of this track because they know they have little control over their fate at Talladega. Some drivers are better than others at avoiding the wrecks but even the best drivers have a 50/50 chance of getting caught up in the “Big One” this week. That means we will need a lot of luck with our Fantasy NASCAR lineups as well. It should be exciting. The 1000Bulbs.com 500 can be seen Sunday at 2 p.m. ET on NBC.

Here are my picks for the race in Talladega….

Joey Logano: Logano is by far the best driver at this insane track. Logano has finished four races in a row at Talladega in the top five. That is either incredible luck or he has a skill no other driver possess. He also has four trips to Victory Lane on the Superspeedways. The No. 22 team dug themselves a hole last week after they had an axle problem before the race began. That means Logano needs to finish both Stages up front and score as many points as possible Sunday. He is the best pick in the field this week.

Chase Elliott: Elliott sits 11th in the playoff standings and seven points below the cut line. He needs a lot of points or a win Sunday to advance to the Round of 8. The good news is he can get it done. Elliott won the last race at Talladega and he finished 3rd at the track last year. I expect the No. 9 team to try and score as many Stage points as possible and stay up front to avoid the wrecks. I would not be surprised to see Elliott in Victory Lane again Sunday.

Aric Almirola: Almirola got off to a hot start in 2019 and then he went into a slump ever since the last race at Talladega. If the No. 10 team is going to have anything positive to look at for the off-season, it could be a win in Alabama. Almirola won this race in 2018 and he has two trips to Victory Lane on the Superspeedways on his resume. Staying out of trouble is the name of the game at Talladega and Almirola is one of the best drivers in the field at avoiding wrecks. He has finished 9th, 1st, 7th, 5th, 4th and 8th in his last six races at the track. I will roll the dice with Almirola Sunday.

Jimmie Johnson: The Hendrick Motorsports cars qualified 1,2,3 and 4. They will line up at the front of the field and try their best to dominate this race. With so many friends up front, the HMS cars have a great chance to score a lot of Stage points. Johnson finished 3rd and 9th at Daytona this season and he finished 7th in this race last year. He has been to Victory Lane before at Talladega so he knows his way around this track. I will take my chances with Johnson Sunday.

Brad Keselowski: I will have Keselowski in the Garage Sunday. He has a series-high 5 wins at Talladega but he has been in a slump at the track recently. Keselowski has not finished in the top 10 at this track since his win in 2017. I doubt he forgot how to race at the Superspeedway though. Keselowski has won a Stage in three of the last five races at Talladega so he has a good chance to score a lot of points this week.