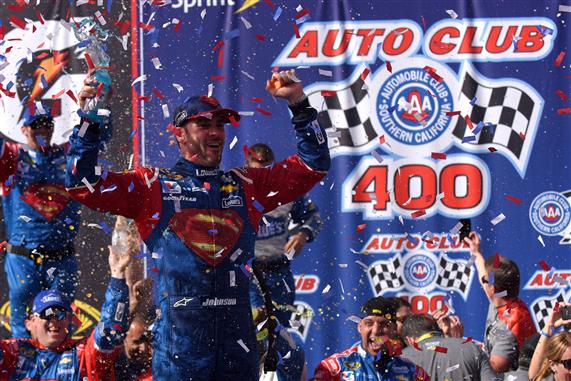 The Monster Energy NASCAR Cup Series will travel to Fontana, California this week for the Auto Club 400. The race can be seen Sunday at 3:30 p.m. ET on Fox Sports 1. Be sure to test your knowledge of NASCAR by competing in the Fantasy Live game on nascar.com.

My Fantasy Live picks were saved last week by the laps led dominator points. Joey Logano and Kyle Busch led 196 laps and scored 98 bonus points for my team. The week could have been a lot better if it was not for blown tires. After scoring 215.5 points in Phoenix my picks are now ranked in the top 98.5%. One more good week should get them into the top 99% for the fourth straight season.

The Auto Club 400 will consist of 200 laps. There will be 100 points available for leading laps and another 100 points available for fastest laps. The trend this season has been for three drivers to score the most points for leading laps and fastest laps (dominator drivers) in the race. It will be important to try and find these three drivers for your team and pair them with two cheaper drivers who can improve their position in the race.

The best way to find these drivers will be to look at the final practice speeds (especially the 10-lap average speeds) and listening to the garage talk (I will have my garage talk notes posted after practice).

Now that there have been three races on non-Superspeedway tracks, fantasy teams can look at the results from Atlanta, Las Vegas and Phoenix to see who will run well at Auto Club Speedway.

Kevin Harvick ($27.75) selling Harvick for Kyle Busch really paid off last week. Busch outscored Harvick by 86.5 points and Harvick’s price dropped 75 cents. Now it is time to purchase him again. Harvick has dominated the last two races at Auto Club Speedway. He qualified second, led many laps and finished second in both races. Harvick could dominate this race the way he did at Atlanta three weeks ago.

Chase Elliott ($27.50) continues to impress. He qualifies up front each week and usually leads some laps. Hendrick Motorsports runs well at this track so I expect Elliott to qualify in the top five, lead a handful of laps and finish in the top five.

Kyle Larson ($27.25) has been the best driver this season but he has not been the best in Fantasy Live. Larson needs to lead more laps in order to be considered the best pick in Fantasy Live. This could be the week when he dominates the race. He won at the sister track (Michigan) using the same aerodynamics package they are using this week. This is one of Larson’s best tracks and he is my pick to win Sunday.

Kyle Busch ($27.00) has been knocking on the door of winning a race this season but he continues to have problems (mostly because of Joey Logano). He is going to win a race sooner rather than later. Joe Gibbs Racing usually runs well at Auto Club Speedway and Busch is usually their best driver. He will be competing in the Xfinity Series race this week and that experience should help him Sunday.

Brad Keselowski ($27.00) will most likely be served with a penalty following his failed post-race inspection at Phoenix. Crew Chief Paul Wolfe will probably be suspended for this race but I am not worried about the No. 2 team. Team Penske is deep and they will probably bring the crew chief from the Xfinity Series to the Cup Series this week. Keselowski has scored the most points in Fantasy Live this season. I doubt they slow down any time soon.

Jimmie Johnson ($26.50) is too cheap this week to ignore. Johnson has a series-best six wins, series-most 980 laps led and a series-best average finishing position (6.5) at Auto Club Speedway. If he looks halfway decent in practice I will make sure the No. 48 car is on my team.

Jamie McMurray ($21.00) has really been running well this season but he is overshadowed by his teammate, Kyle Larson. What makes McMurray so good in Fantasy Live is his floor. McMurray has scored at least 24.5 points in every race with a high of 45.5 points. I expect him to score about 35 points again this week.

Clint Bowyer ($16.00) has been the best value pick of the season and I do not plan to sell him any time soon. Bowyer has the 21st highest price and he has scored the ninth-most points in Fantasy Live this season. Having Bowyer on your team really gives you four strong drivers for the race. He should score another 30 points for your team this week.

Ty Dillon ($12.65) is the best option for fantasy teams who do not have Clint Bowyer. Dillon has the 25th highest price but has scored the 15th-most points in Fantasy Live at the non-Superspeedway tracks. Dillon will compete in the Xfinity Series race Saturday and that experience should help him on Sunday. Dillon will be a good pick if he qualifies outside the top 15 this week.