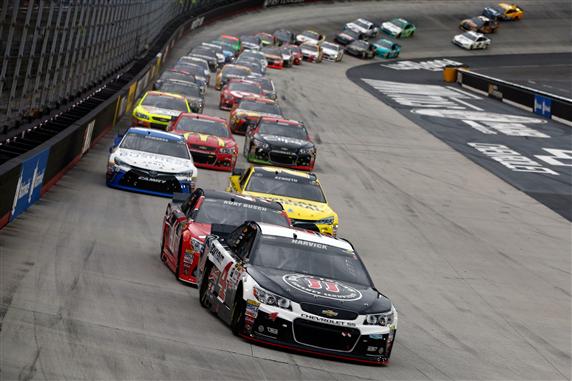 The Monster Energy NASCAR Cup Series will travel to Bristol, Tennessee this week for the Food City 500. The race can be seen Sunday at 2 p.m. ET on Fox. Be sure to test your knowledge of NASCAR by competing in the Fantasy Live game on nascar.com.

This is one of the most important races of the season for the Fantasy Live game. There are 500 laps in the race Sunday and 500 bonus points available for leading laps and fastest laps. Fantasy teams could easily score over 600 points this week. You can climb to the top of your league standings with a good race this week or fall way behind if you select the wrong drivers.

The Food City 500 is all about finding the dominant drivers (drivers who lead the most laps and run the fastest laps). Track position is everything at Bristol. Passing is very difficult and the drivers who start upfront will have the premium pit stalls. This is a huge advantage in the race.

* These points do not include Stage points

The drivers listed above are the drivers I would build my team around if they turn fast laps in practice this weekend.

Joey Logano ($28.00) has not only had a lot of success this season, he has also run well at Bristol. Logano has finished every race this season expect Phoenix in the top six. He actually had the best car at Phoenix but was involved in an accident. Logano has two wins and led 294 laps in the last five races at Bristol. Team Penske has been the class of the field this season. Logano should have a great chance to get to Victory Lane Sunday.

Chase Elliott ($27.50) does not have a lot of experience at Bristol but he has run well in the races he competed in. Elliott started 19th and finished 4th in his first race in Thunder Valley and he qualified 6th and finished 15th in his second race. Hendrick Motorsports usually runs well at this track and Elliott has been their most consistent driver this season. Make sure Elliott is on your team if the No. 24 car is fast in practice.

Kevin Harvick ($27.00) is the safest pick in the field this week and the most likely driver to dominate this race. The No. 4 car went to Victory Lane in the last race at Bristol and it would not surprise anyone if the team did it again Sunday. Harvick has a series-best driver rating and the second-most laps led (325) in the last four races at Bristol. He will be a driver to keep an eye on in practice.

Kyle Busch ($26.75) is the best driver in the series at Bristol for the first 400 laps. The last 100 laps are where Busch has problems. Busch has a series-high 448 laps led in the last four races at Bristol. He also has an average finishing position of 28.3. In Fantasy Live it does not matter where Busch finishes the race. If he leads 150 laps he will still be one of the highest scoring drivers even if he finishes last. Busch should be on all teams if he shows any speed in practice.

Denny Hamlin ($25.00) is known for his success on the short-flat tracks (Phoenix, Martinsville and Richmond), but he is also good at Bristol. Hamlin finished two of the last three races in Thunder Valley in the top three. He has also led 73 laps in those races. Joe Gibbs Racing needs to find Victory Lane soon. I would be surprised if the organization did not put a lot of work into their cars this week.

Jamie McMurray ($21.75) is having one of his best seasons in the Cup Series. He has four top-10 finishes in the first seven races. Chip Ganassi Racing put a lot of work into their cars in the offseason and it seems to be paying off. McMurray qualified 28th and finished 8th at Bristol last August. I expect him to qualify and finish in the top 15 this week.

Clint Bowyer ($18.50) finished 8th in this race last year while driving for HScott Motorsports. Just imagine what he is capable of in his new Stewart-Haas Racing Ford. Bowyer has never won at Bristol but he does have 10 finishes in the top 10. His price is still low enough where you could squeeze him in as your fourth driver this week.

Ricky Stenhouse Jr. ($14.50) should be on all teams this week. Bristol is by far his best track and it may be the only place where you will want to use him on your team. Stenhouse has finished four of the last six races in Thunder Valley in the top six. Last year he qualified 25th and finished 2nd. He is a great value as a fourth driver for your team Sunday.

Matt Dibenedetto ($7.00) is my No. 1 cheap driver this week. If there is any way you can fit Ricky Stenhouse Jr. and Dibenedetto on your team, you should do it. Dibenedetto understands the rhythm it takes to turn fast laps at Bristol. He finished 6th and 17th in his two races at the track last year. That is great value for a driver priced at $7.00.

Here are my pre-qualifying picks for the Food City 500: