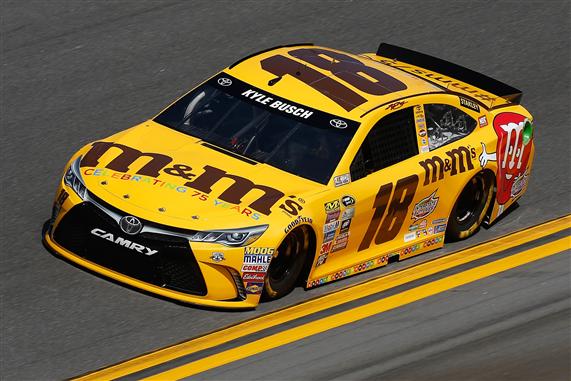 The Monster Energy NASCAR Cup Series travels to Speedway, Indianapolis this week for the Brickyard 400. The race can be seen Sunday at 3 p.m. ET on NBC. Be sure to test your knowledge of NASCAR by competing in the Fantasy Live game on nascar.com.

Last week my picks scored 420 points and shot my current ranking to the top 99.4%. It will be impossible to score that many points this week but I will do my best to climb higher in the overall standings.

I said in my article last week that fantasy players could select Martin Truex Jr., Kyle Larson and Kyle Busch and just leave them on your team. This strategy is becoming true. These three drivers have scored 400 points more than any other drivers in the Fantasy Live game. Here are the top 10 drivers in Fantasy Live in the last four downforce races (I do not count Sonoma and Daytona because those are wild car races)…

There are only 160 laps in the race Sunday. That means there are only 160 bonus points available for leading laps and fastest laps this week. Kyle Busch led 149 of the 170 laps last year, but usually the dominator points are spread out between three drivers. Selecting three dominators (drivers who can lead laps and score fastest laps in the race) and pairing them with two cheap drivers will be the winning strategy this week.

Martin Truex Jr. ($28.25) has been by far the best driver in the Fantasy Live game. He has scored 1,624.5 points this season. That is 317.5 more points than Kyle Larson who is in second place with 1,307 points. Truex continues lead laps, post fastest laps, win Stages and finish in the top three. There is no reason to drop the No. 78 car from your team. Just leave Truex in your No. 1 spot and worry about the other four drivers each week.

Kyle Larson ($28.00) has competed in three Brickyard 400s and he has finished all of them in the top 10. The new aero-package should help him more than the other drivers. Larson loves a car that drivers on the edge. Drivers will have to run the car to the edge of spinning out this week in order to run up front. Kyle Busch and Kyle Larson do it better than the other drivers. That is why they consistently run up front at Indianapolis.

Kevin Harvick ($27.50) won his first Brickyard 400 in 2003. He has run well at the track but he is still trying to find a way to kiss the bricks again. Harvick has been one of the most consistent drivers at the track since he joined Stewart-Haas Racing. Harvick has an average starting position of 4.6 and an average finishing position of 5.6 while at SHR. The No. 4 car should be up front Sunday.

Kyle Busch ($27.00) is still looking for his first win and it should come this week at the Brickyard. He has been by far the most dominant driver at the track the last two seasons. Busch has won the pole, led 168 laps and made his way to Victory Lane in the last two races at Indianapolis. His average finishing position the last five seasons is 3.2. He is the best pick for your fantasy team this week.

Denny Hamlin ($27.25) will have momentum after winning the race last week at New Hampshire. Hamlin hit on something in the tire test at Indianapolis in April. His speeds were the fastest and other teams were talking about how fast his car was. Hamlin has three consecutive top-five finishes at the Brickyard. The No. 11 car should be fast again this week.

Matt Kenseth ($25.75) is still looking for his first Brickyard 400 trophy. He is running out of chances. Kenseth has raced at Indianapolis 17 times and he has three runner-up finishes. Last year Kenseth qualified 18th and finished second. Joe Gibbs Racing knows how to setup cars for this track so Kenseth will have a good chance to win his first race of the season this week.

Ryan Blaney ($18.50) won the race at Pocono and he will have a good chance to win this week. The Wood Brothers Racing Ford has had a lot of speed this season. Usually horsepower plays a part in who wins at the Brickyard. Blaney should have the horses to keep the No. 21 car in the top five Sunday.

Ty Dillon ($16.00) is not running as well now as he was earlier in the season. He still has value this week. Dillon has never competed in a MENCS race at the Brickyard but he has four races at the track on his Xfinity Series resume. Dillon has only won one race in his Xfinity Series career. It came at Indianapolis in 2014. This has been one of Dillon’s best tracks. His average finishing position in the Xfinity Series is 5.5 at the Brickyard. The No. 13 car should be able to finish in the top 20 Sunday.

Paul Menard ($13.00) is not the first name you think of when you start selecting your drivers but this week is a good time to consider the No. 27 car. Indianapolis is one of the best tracks for Menard. He won the race at the Brickyard in 2011 and he finished 10th in the race last year. I doubt he will finish in the top five this week but if he qualifies outside the 20, he should be on all teams because of his chances of moving up in the race.

Danica Patrick ($8.75) made my team last week for the first time in two years. I never picked Patrick because her price was too high for her value. Finally Fantasy Live lowered her price and now she has some value. Last week she qualified 30th and finished 13th. If she qualifies outside the top 25 Friday I will have her on my team again Sunday.

Landon Cassill ($5.75) had a great week for a cheap driver at New Hampshire. He qualified 28th and finished 23rd. He usually runs well at the Brickyard. Last year he qualified 33rd and finished 20th in the Front Row Motorsport Ford. I expect similar results from him Sunday.

Here are my pre-qualifying picks for the Brickyard 400: