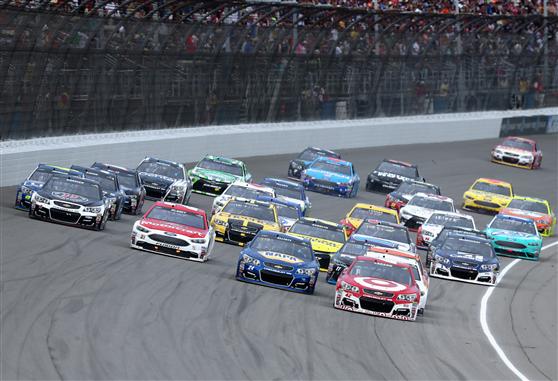 The Monster Energy NASCAR Cup Series travels to Brooklyn, Michigan this week for the FireKeepers Casino 400. The race can be seen Sunday at 3 p.m. ET on Fox Sports 1. Be sure to test your knowledge of NASCAR by competing in the Fantasy Live game on nascar.com.

Fantasy Live has been my best game the last two seasons and adding some Stage points to the scoring format has not slowed me down this year. My picks are currently beating 99.3% of the entries. The switch to Kyle Busch last week really paid off for my team. I plan to have my picks locked down better after final practice this week so there will be no need for a last minute change.

There are 200 laps in the race this week and 200 bonus points available for leading laps and fastest laps. The race at Michigan usually plays out similar to what we saw in March at Auto Club Speedway. That race had two dominators (Kyle Larson led 110 laps and Martin Truex Jr. led 73 laps). I expect the same this week and it most likely will be the same two drivers.

My strategy this week will be two take three top-tier drivers and two cheap drivers. This has been my strategy for most of the races this season and so far it has worked out well.

Martin Truex Jr. ($28.00) has been the best driver this season and that should not change Sunday. His stats at Michigan are not great but he did finish both of the races in 2015 in third place. There is no stopping this team right now. Truex has won eight Stages this season, scored 185 Stage points and led 876 laps. He has a good chance to dominate this race and it will be hard to finish at the top of your league standings this week without the No. 78 car.

Kevin Harvick ($27.75) has been one of the most consistent drivers at Michigan. He has finished seven of his last eight races at the track in the top five. That includes five runner-up finishes. Harvick has won three Stages this season and scored 127 Stage points. The No. 4 car should qualify up front Friday and finish in the top five Sunday.

Brad Keselowski ($27.25) is a Michigan native who is still looking for his first win at his home track. Keselowski has been one of the most consistent drivers at the track. He has finished six consecutive races at Michigan in the top 10. Keselowski was the biggest threat to Kyle Larson earlier this season at Auto Club Speedway. The Blue Deuce should finish up front Sunday.

Chase Elliott ($26.75) is my pick to win at Michigan. This has been the season of first time winners and the trend will continue this week. So far Austin Dillon, Ricky Stenhouse Jr. and Ryan Blaney were able to score their first trip to Victory Lane. Michigan is the best track for Elliott so he should get the job done Sunday. Elliott finished both of his races at Michigan in second place and he has never finished outside the top 10 at Auto Club Speedway. The No. 24 will be one of the cars I will be watching in practice this weekend.

Ryan Blaney ($19.75) has been running like an elite driver this season but his price remains under $20. Blaney is a great option if you want to spend up to get a top driver (Kyle Larson) and three mid-tier drivers (Jamie McMurray, Kurt Busch and Ryan Blaney) along with a cheap driver (David Ragan). The No. 21 Wood Brothers Racing car has had a lot of speed and they show no signs of slowing down any time soon.

Chris Buescher ($11.25) has been my fourth driver since Kansas and I have no plans of selling him. The way he is running right now is perfect for Fantasy Live. He usually qualifies outside the top 25 and finishes inside the top 20. Buescher’s price continues to increase so if you purchased him at $10 congratulations. If you do not have him on your team, what are you waiting for?

Michael McDowell ($10.00) has been one of the biggest surprises this season. The No. 95 car consistently runs in the top 20. The problem is that he has also been qualifying very well. If for some reason McDowell qualifies outside the top 25 he must be on your team Sunday. The team has the speed to race their way inside the top 20.

Bubba Wallace Jr. ($10.00) had his first race in the Monster Energy NASCAR Cup Series last week and it did not go as planned. It was obvious that Wallace was not used to the digital dash because he had three speeding penalties in the race. That is a problem that can be easily fixed. If Wallace qualifies outside the top 20 he will be an excellent pick this week.

Here are my pre-qualifying picks for the FireKeepers 400: