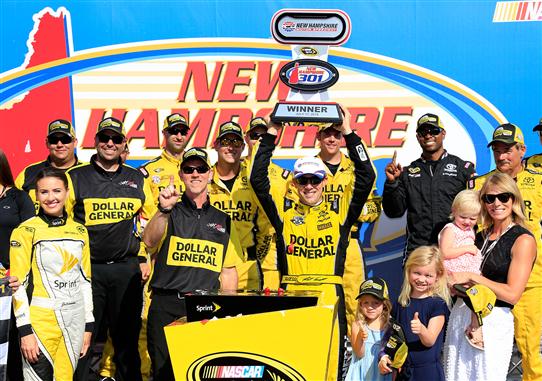 The Monster Energy NASCAR Cup Series travels to Loudon, New Hampshire this week for the Overton’s 301. The race can be seen Saturday night at 7:30 p.m. ET on NBC Sports Network. Be sure to test your knowledge of NASCAR by competing in the Fantasy Live game on nascar.com.

The Magic Mile is a shorter track than Kentucky but I expect to see the same drivers who ran up front last week to run well Sunday. Martin Truex Jr. and Kyle Larson have dominated all of the downforce races. That should not change this week. Kyle Busch is also consistently running up front. Fantasy teams can almost select these three drivers each week and finish very well in the race.

There are 301 laps in the race Sunday. I am not sure why they scheduled the extra lap and did not make it 300 laps, but it always seems that last lap always comes into play at the end of the race. There will be 301 bonus points available for leading laps and fastest laps this week. It will be very important to select the dominators (drivers who lead the most laps and post fastest laps in the race) for your team.

One dominator is almost assured to be the driver who wins the pole. The driver who starts the race from the No. 1 spot has led an average of 106.7 laps at the 2-mile, 1.5-mile and 1-mile oval tracks this season. My strategy this week will be to select three high-priced drivers who can lead many laps and pair them with two cheaper drivers who can score position differential points.

Martin Truex Jr. ($28.25) is my pick to win Sunday. The No. 78 team said they are tired of being labeled the best team at the 1.5-mile tracks. They want to prove they are good at all tracks so they are working hard to make a statement at New Hampshire. I would not bet against them. Truex qualified 2nd, led 141 of the 300 laps and finished 7th in the last race at New Hampshire. He should lead the most laps and finish in Victory Lane Sunday.

Kyle Larson ($27.75) is not the first driver that comes to mind when people think of the Magic Mile. He finished both races his rookie season in the top 3 but he only has 1 finish in the top 10 since. The new aero-package used this season will help Larson Sunday. He has 6 second-place finishes and 2 wins one the oval tracks this season. He is almost a lock for a top-five finish this week.

Kevin Harvick ($27.50) is always considered the master at the flat tracks. He is almost unbeatable at Phoenix, runs very good at Richmond and he is one of the most consistent drivers at New Hampshire. Harvick finished 4th in the July race at New Hampshire and won the race in September. He has finished 4 of his last 5 races at the track in the top 4. Harvick is a safe pick for your team.

Kyle Busch ($27.25) keeps knocking on the door to Victory Lane but he just can’t seem to break through. Most of his problems have to do with competing against the No. 78 car. Busch is very good at New Hampshire so he will have a good chance to win the race Sunday. He has finished 7 of his last 8 races at the track in the top 8 (including 4 races in the top 3). Pairing Busch with Martin Truex Jr. could be the winning strategy this week.

Brad Keselowski ($26.50) started the season red hot but he has been in a slump since the race at Kansas. His average finishing position in the last 7 races is 24.4. That makes him a hard driver to trust. If Keselowski is going to get back on track it will happen at New Hampshire. He has been very good on the short flat tracks. He finished 5th at Phoenix and 2nd at Richmond. Keselowski is a better pick in other games because he usually does not lead many laps. The Blue Deuce will be one of the cars to watch in practice Saturday.

Matt Kenseth ($25.75) has been the best driver at New Hampshire since he joined Joe Gibbs Racing. Before joining JGR Kenseth was 0-26 at the track. Since joining JGR Kenseth has won 3 of 8 races (including 6 finishes in the top 5). Kenseth has finished the last 3 races at the track in the top 2. If he is going to win a race before leaving JGR it will happen at New Hampshire Motor Speedway.

Ryan Blaney ($18.75) does not have the best stats at New Hampshire but his price is too cheap to ignore. Blaney finished his both races at the track in the top 12 last year. The Wood Brothers Racing car has more speed this year and Blaney has more experience. I expect him to run in the top 10 Sunday.

Dale Earnhardt Jr. ($17.25) has been written off by most Fantasy NASCAR players but he has not been running as bad as people think. Earnhardt has finished 5 of the last 6 downforce races in the top 12. He has also finished 4 of the last 5 races at New Hampshire in the top 10. He is a good value because of his price. Earnhardt probably will not lead any laps but he should finish in the top 12 this week.

Chris Buescher ($12.25) has been a very good value pick in Fantasy Live. He usually qualifies outside the top 25 and finishes in the top 20. That kind of performance rewards your team with a top 15 driver for a low price. Buescher did not run well at this track last year but he has a much better car this year than he had in 2016. His teammate (AJ Allmendinger) should be able to teach him how to save his brakes and run inside the top 20 Sunday.

Danica Patrick ($8.75) is finally getting into a price range where she is a valuable pick in Fantasy Live. The No. 10 car has had decent results at New Hampshire. Last year Patrick started 29th and finished 14th in the first race and started 24th and finished 18th in the second race. Most fantasy players would take those results from here Sunday. Patrick finished 22nd at Phoenix and 18th at Richmond. She should finish near the 20th spot this week. That is pretty good value for a driver at her price.

David Ragan ($7.75) has been the best cheap driver and that should not change this week. The No. 38 car should qualify outside the top 30 and finish inside the top 25. That is what Ragan has done this season and that is what his results at New Hampshire suggests. Here are the results for Ragan at the Magic Mile the last 2 seasons: July 2015 (Started 18th finished 3rd), September 2015 (Started 40th finished 18th), July 2016 (Started 30th finished 23rd) September 2016 (Started 32nd finished 23rd). Not bad value for one of the cheapest drivers in the game.

Here are my pre-qualifying picks for the Overton’s 301: