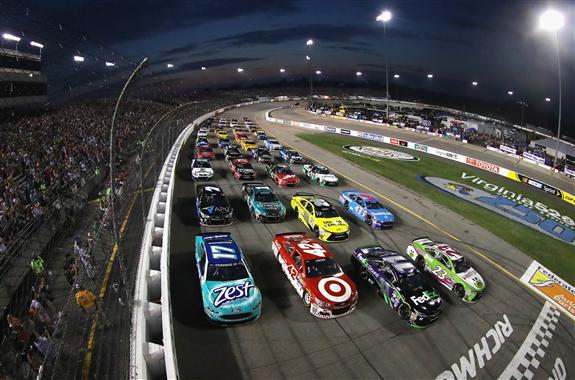 The Monster Energy NASCAR Cup Series travels to Richmond, Virginia this week for the Toyota Owners 400. The race can be seen Sunday at 2 p.m. ET on Fox. Be sure to test your knowledge of NASCAR by competing in the Fantasy Live game on nascar.com.

Last week did not go well at all. Kyle Busch had one of the fastest cars in all of the practice sessions and his performance in the race was horrible. His brother (Kurt) did not do much better. Kyle Larson and Clint Bowyer were once again rock solid. Luckily there is another short track on the schedule this week so I will have a great chance to pick up the points I lost at Bristol.

Richmond is a short track but it is nothing like the track we saw last week in Thunder Valley. Richmond is a .75-mile flat track which races similar to Phoenix. The drivers who performed well in the desert should run up front Sunday.

There are 400 laps in the race Sunday and 400 bonus points available for leading laps and fastest laps run in the race. My strategy will be to take three dominators (drivers to lead laps) and two value picks (drivers to improve their position in the race). If Clint Bowyer looks competitive in practice I may only take two dominators, one driver in the $22 range, Clint Bowyer and two cheap drivers. This is the strategy I used last week but it did not pay off. I will make a decision after the final practice.

Kyle Larson ($28.00) does not have the best stats at Richmond but this team has been running so well this season that it does not matter what track they race on. Larson has scored the most points (483.5) in Fantasy Live in the last five races. He is racing in the Xfinity Series race Saturday and that knowledge seems to transfer into success on Sunday. Larson is the best driver to build your team around Sunday.

Joey Logano ($28.00) has been much better in other fantasy games than he has been in Fantasy Live at Richmond. Logano has finished six consecutive races at the track in the top 10 but he seldom leads any laps. If you are going to pay the top price for a driver, he must lead at least 50 laps in the race. Logano has been very good on the short flat tracks so this could be his breakout race. Keep an eye on the No. 22 car in practice this week.

Martin Truex Jr. ($27.25) is the ultimate contrarian play Sunday. Most fantasy players will load their lineups with the Joe Gibbs Racing, Team Penske and the Stewart-Haas Racing drivers. Truex outperformed them all in the last race at Richmond. The No. 78 car led a series-high 193 laps and finished third. Truex scored a series-high 181.5 points in Fantasy Live. Do not overlook this team this week.

Kevin Harvick ($27.00) has not been as dominant this season as he has the past three years, but the No. 4 team can come to life at any time. Harvick finished both races at Richmond in the top five and led a total of 63 laps. Do not worry about his practice times because this team usually works on long run speed and not one fast lap. If Harvick qualifies in the top five he should be on every team Sunday.

Kyle Busch ($26.50) is really starting to frustrate me. When I select him on my team he has tire issues. When I do not select him he leads the most laps in the race. The No. 18 car is the best in the field at Richmond and he was the best at Phoenix earlier this season. I would be shocked if Busch did not qualify up front and lead many laps at his second-best track (Kentucky is his best) this week.

Denny Hamlin ($25.00) could be the driver that earns your team 200 points and sends you to the top of your league standings. Hamlin is very good at his home track. He won the pole and led 189 laps on his way to Victory Lane at Richmond last year. If the No. 11 car shows any speed in practice, make sure Hamlin is in your lineup.

Clint Bowyer ($19.25) has been the biggest surprise of the 2017 season. This may be the last week he can be considered a value pick because his price is increasing at a rapid pace. It would be great to own Bowyer at his original $14 price. Bowyer ran well at Richmond when he was with Michael Waltrip Racing. I expect him to easily finish in the top 10 Sunday.

Ryan Newman ($18.75) won the race at Phoenix and he should be a good pick for Sunday. The best way to use Newman this week is to select one of the higher priced drivers (Kyle Larson, Kyle Busch or Kevin Harvick) and pair them with Denny Hamlin, Clint Bowyer, Newman and a cheap driver (Cole Whitt). This type of lineup could score bonus points from four drivers finishing each Stage in the top 10. If Newman does not look fast in practice or qualify up front, I would scrap this idea.

Ricky Stenhouse Jr. ($14.75) is one of the best fourth drivers for your team. His price is much cheaper than what it should be based on his results on the track. Stenhouse finished fourth at Phoenix and 10th at Martinsville. Roush Fenway Racing has their short track program working well this season. Stenhouse is a good choice if you want to spend up on three higher priced drivers.

Ty Dillon ($13.25) has been Mr. Consistent in Fantasy Live. He usually qualifies around the 20th position and finishes near the top 15. That is the kind of production you want from the fourth driver on your team. Dillon is not going to win you your league this week but he is a safe pick which combined with three dominators could put you at the top of your league standings.

Cole Whitt ($5.00) is my No. 1 cheap driver this week. This dude has been very good as a cheap driver in Fantasy Live. I am surprised his price has not gone above $5 this season. Whitt has scored as many points as Chris Buescher and more points than Kurt Busch, Paul Menard, Danica Patrick, Landon Cassill and Matt Dibenedetto this season in Fantasy Live. He will be my go-to driver once again this week.

Here are my pre-qualifying picks for the Toyota Owners 400: