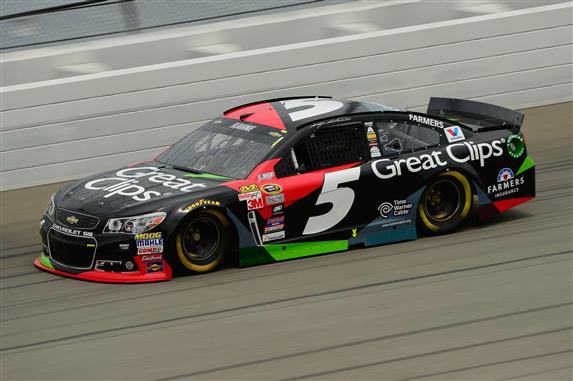 The 59th running of the Great American Race will kick off what should be one of the most exciting NASCAR seasons in some time. There have been many changes made during the offseason and every change affects Fantasy NASCAR in some way. Some drivers will benefit from the changes, while other may not perform as well as they have in the past.

1.Kyle Larson (Chip Ganassi Racing): Larson is my No. 1 sleeper pick this season. Most Fantasy NASCAR rankings predict Larson to finish somewhere near the top 10. I think he could be inside the top five.

The offseason change that affects Larson the most is the reduced downforce on the cars. NASCAR ran this aero-package last year at Kentucky and Michigan and Larson won the Michigan race. His dirt track background makes him very good at driving a car that slides around the track. These cars will be much loser this year and that sets up perfectly for Larson.

2. Kasey Kahne (Hendrick Motorsports): It has been 84 races since Kahne made a trip to Victory Lane (Atlanta in 2014). Most fantasy players have written off the No. 5 car because they have been burned by him so many times the last two seasons. This should be the year when Kahne rewards fantasy teams with some top-five finishes.

Kahne ended the 2016 racing as well as he had in a long time. Kahne finished seven of the last 12 races in the top 10, including a third-place finish at Charlotte. If Hendrick Motorsports has as much speed in 2017 as they did at the end of the 2016 season, Kahne should be in a position to win. I think it could happen at Charlotte. He has four wins at that track.

3. Clint Bowyer (Stewart-Haas Racing): Will there be any driver more motivated than Bowyer to get into the car at Daytona? I doubt it.

After Michael Waltrip Racing closed their shop following the 2015 season, Bowyer was forced to drive for the less-funded H-Scott Motorsports in 2016. It was a rough year for Bowyer, but he got as much out of the car as he could. Most fantasy players will have a hard time trusting Bowyer early in the 2017 season because they will remember how poorly he ran last year. This is a new season and he is on a new team (Stewart-Haas Racing).

Bowyer can win in the Cup Series. He has won on the Superspeedways (2 wins at Talladega), the road courses (Sonoma in 2012), the intermediate tracks (Charlotte in 2012) and the flat tracks (twice at New Hampshire and once at Richmond). Bowyer has never been behind the wheel of a car as good as he will have in 2017. I expect Bowyer to win a race and finish 15-18 races in the top 10.

4. Erik Jones (Furniture Row Racing): Jones is the co-favorite to win the Rookie of the Year award. Daniel Suarez is the other driver and Ty Dillon is not far behind. I think Jones wins the award because the new Stage format suites his driving style perfectly.

Jones is an aggressive driver much like his mentor, Kyle Busch. He usually qualifies up front and tries his best to stay up front. He is not a driver who is known for running well on the long runs. I expect Jones to finish many of the Stages in the top 10 this year. The question is whether or not he can finish the race in the top 10.

Most fantasy racing sites have Jones ranked between positions 15-20 this season. Furniture Row Racing will provide him with some fast cars and Jones could surprise fantasy players by finishing the season right outside the top 10.

5. Michael McDowell (Leavine Family Racing): McDowell only competed in 31 races last season, but this year he has a charter (leased from the No. 7 team at Tommy Baldwin Racing) and he should have enough sponsorship to get him through the season.

McDowell raced well at the end of 2016. Todd Parrott was named the crew chief before the Charlotte race in October. McDowell finished five of the last seven races inside the top 20. He even ended the season with a top-10 finish at Homestead.

I expect McDowell and Parrott to pick up where they left off in 2016. McDowell will be a cheap driver in most salary cap games. Fantasy players need to take advantage of his price before it increases. He will also have a lot of value in Yahoo Fantasy Auto Racing at the Superspeedways and the short-flat tracks.