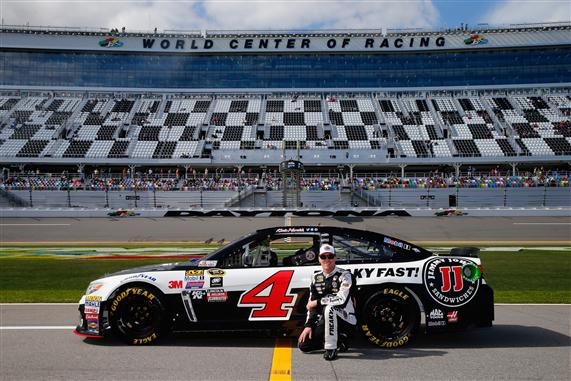 Here he is… the No. 1 driver in my Fantasy NASCAR Rankings. Kevin Harvick does everything needed to be at the top of the list. He leads laps, wins races and qualifies well. He was the No. 1 driver in Fantasy Live and Yahoo Fantasy in 2016 and I doubt the switch to Ford will slow him down in 2017.

2016 RECAP: Since joining Stewart-Haas Racing in 2014, Kevin Harvick has been almost unstoppable. In 2016 he won four races (Phoenix, Bristol, New Hampshire and Kansas), scored 17 finishes in the top five and 27 finishes in the top 10. Harvick was able to lead 1,384 laps and won two poles (Charlotte and Homestead). The only thing that could slow Harvick down in 2016 was his pit crew. Hopefully the team gets that fixed in the offseason.

Harvick was the best pick for the second straight year in Yahoo Fantasy. No driver scored as many points as the No. 4 car. Harvick was a good pick at every track so fantasy players had to use their eight allocations with him wisely. Harvick scored over 100 points in 10 races (Atlanta, Auto Club, Phoenix, Richmond, Bristol, Kentucky, New Hampshire, Darlington, Kansas and Homestead). Harvick was also able to score bonus points for qualifying in 13 races and bonus for leading laps in 22 races. He was definitely “Freaky Fast” in 2016.

Harvick was also incredible in the Fantasy Live game. He was the most expensive driver for most of the season. He scored the most points (1,044.5) on the intermediate tracks and the most points (502) on the steep ovals (Bristol, Dover and Darlington). Harvick was so good because of his ability to lead laps and finish in the top five. Fantasy teams had to pay a high price to add Harvick to their team, but it was hard to win your league without the No. 4 car in your lineup.

2017 PREVIEW: Harvick is my top fantasy driver for the 2017 season. Some people think there may be a falloff at Stewart-Haas Racing since the team is switching to Ford. This organization won the Sprint Cup Championship in only their third season and Harvick won the Championship in his first season at Stewart-Haas Racing. This team knew the change to Ford was coming for a long time so they should be more than prepared to go racing at Daytona.

Harvick was placed into Group A of Yahoo Fantasy and teams need to try to get a win or a top five finish out of all nine of their allocations with the No. 4 car. He is a “must start” driver at both races at Phoenix and he is really good at Darlington, Indianapolis and Kansas. Although Harvick is good at the Superspeedways (Daytona and Talladega); I would not recommend using him in these races. His allocations are too important at the other tracks on the schedule. Harvick is also good on the road courses (Sonoma and Watkins glen), but I would avoid him in Yahoo Fantasy at these tracks as well.

If Harvick is not the most expensive driver to start the season in Fantasy Live I will be shocked. I expect his price to be at about $28. If it is, I would avoid him at Daytona and hope his price comes down after the race. If it does, fantasy teams need to select Harvick for Atlanta. He is one of the best drivers at that track. I would recommend leaving him on your team unless he goes into an unforeseen slump.

I am not sure if Harvick will win the NASCAR Championship in 2017, but he should be the best pick in fantasy racing. Harvick has scored more points than any other driver the past two seasons and I see no reason why the team should slow down this year. If you play in a game where you draft drivers, make sure Harvick is your No. 1 pick. He is the most consistent driver in the sport as scoring well in fantasy racing.