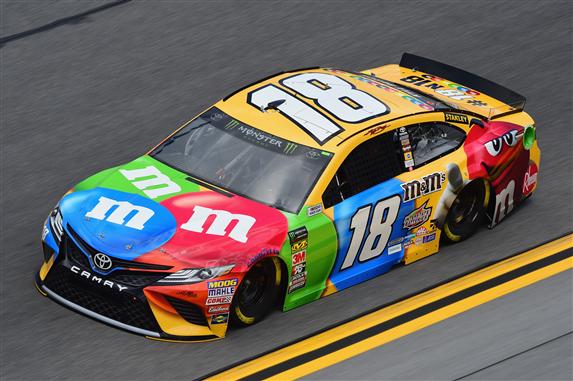 2018 RECAP: Kyle Busch battled Kevin Harvick for the No. 1 spot in Fantasy NASCAR in 2018. It was close but Harvick led more laps and that led to the No. 4 car scoring more points. It was still an awesome year for Busch. He tied Harvick with eight races won. He also finished 22 races in the top five (61% of the races), 28 races in the top 10 (77% of the races), won four poles (second-most in the Cup Series) and led 1,469 laps (second-most in the Cup Series). Busch has made the final four in Homestead for four straight seasons. He is the closest thing to a lock to making it back this year. (Kyle Busch ranked 2nd in fantasy points scored in 2018)

2019 Preview: Everything will be the same with the No. 18 team in 2019. Adam Stevens will once again call the shots onto the pit box and Mars Candy signed a long-term deal to sponsor the car. The only change for Kyle Busch will be within the Joe Gibbs Racing organization. Busch will now have Martin Truex Jr. as a teammate. If these two drivers can put their egos aside and work together, they should be able to dominate the Cup Series this season.

Kyle Busch gets the No. 1 spot in my rankings because Toyota has had three seasons to work with the Camry, while Ford will be debuting the new Mustang chassis at Daytona. The new car could set Kevin Harvick back a notch, so Busch gets the top spot. Either way, both drivers will be the top picks in Fantasy NASCAR in 2019.

It is no secret that Kyle Busch has won at every track on the NASCAR circuit. It has been a long, long, long time since he went to Victory Lane at Daytona or Talladega (2008). Busch has had absolutely no luck at Daytona. His average finishing position in his last four races at Daytona is 29th. Busch has not been much better at Talladega. His average finishing position in his last five races at Talladega is 19.8. Your allocations with Busch in the Driver Group Game are too important to use at the Superspeedways. He is only worth a look in Daily Fantasy Sports (DFS) if he qualifies outside the top 20. (Kyle Busch ranked 19th in fantasy points scored on the Superspeedways in 2018)

Kyle Busch is the best driver in the Cup Series on the flat tracks (Phoenix, Richmond, Martinsville and Loudon). His best track is Martinsville. He has not finished outside the top five at Martinsville since 2014. That is dominance! His average finishing position at Martinsville since 2014 is 2.8. Busch MUST be in all lineups at Martinsville. Busch is trying hard to take Kevin Harvick’s crown as King of Phoenix. Busch has finished 1st, 2nd, 7th, 3rd, 2nd, 4th and 4th in his last seven races in the desert. That is close to the dominance Harvick has at the track. He should be in all fantasy lineups at ISM Raceway. Busch has also been the best driver at Richmond over the last two seasons. He finished 1st and 2nd in his last two races at the track. Guess what… Busch is good at Loudon too. He won the last two races at the Magic Mile. Make sure Busch is in your fantasy lineup whenever the Cup Series competes on a flat track. (Kyle Busch ranked 1st in fantasy points scored on the flat tracks in 2018)

Kyle Busch grew up racing the Bullring in Las Vegas and that has translated into a lot of success at Bristol. He has seven wins in the Cup Series in Thunder Valley. That includes two of the last three races at the track. Make sure he is in your fantasy lineups at Bristol. His success at Dover is a little more complicated. Busch is awesome in the fall races at the Monster Mile and he has not lived up to expectations in the spring. I cannot explain it and he cannot either. His average finishing position in the last four fall races is 3.2. His average finishing position in his last four spring races is 29.2. Use Busch in the fall at Dover and fade him in the spring. (Kyle Busch ranked 4th in fantasy points scored on the steep tracks in 2018)

Kyle Busch is one of the best road course drivers in the sport. He has two wins at Sonoma and two wins at Watkins Glen. The only * on his resume is at the Charlotte Roval. Busch has technically won at every track, but he has never won on the Roval. He would love to check that box in 2019. He will also be good at Sonoma and Watkins Glen. Busch has a 4.5 average finishing position in his last four races at Sonoma and his last four races at Watkins Glen. He is a great pick for your fantasy team when the Cup Series turns laps at the road courses. (Kyle Busch ranked 9th in fantasy points scored on the road courses in 2018)