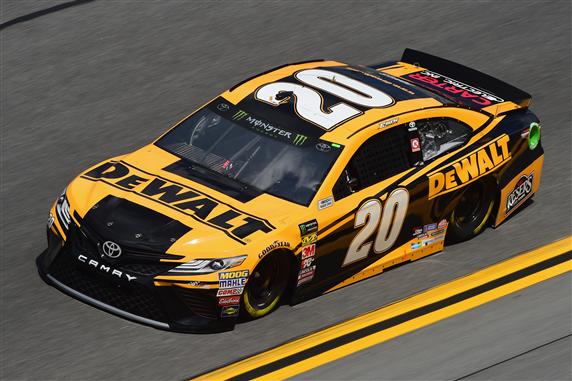 2018 RECAP: Erik Jones showed some improvement in his sophomore season in the Cup Season. He won his first race (Daytona), finished nine races in the top five (25% of the races), finished 18 of the races in the top 10 (50% of the races) and won one pole (Las Vegas). The only stat that he did not improve was his laps led. In 2017 Jones led 310 laps. Last year he only led 99. He made the playoffs and finished 15th in the point standings. I expect Jones to finish in the top 10 this season. (Erik Jones ranked 13th in fantasy points scored in 2018)

2019 Preview: Almost everything will be the same in 2019 with the No. 20 team. Chris Gayle will once again serve as the crew chief and DeWalt will be the primary sponsor. Martin Truex Jr. will replace Daniel Suarez at Joe Gibbs Racing and this could help Jones this season. He worked very well with Truex in the past and having another familiar face in the garage has to help.

Erik Jones has a lot of talent. I compare him to a young Kyle Busch. The chances of him winning a Cup Series championship are very high but it probably will not be for a few years. Toyota enters the season with three years of experience with the Camry while Chevy and Ford are figuring out their new cars. Joe Gibbs Racing should be the team to beat early in the season. That means Jones will be a good driver for your team at almost every type of race track.

Erik Jones won his first Cup Series race at Daytona last summer. That does not necessarily make him a good pick at the Superspeedways. Jones has been hit or miss at Daytona in his career. He has finished 1st, 9th, 36th and 39th in his four starts at the track. We want drivers who are more consistent. Talladega ranks as his worst track. He only has one finish inside the top 30 in Alabama. Find a better driver at the Superspeedways for your fantasy team and save Jones for the intermediate tracks. (Erik Jones ranked 21st in fantasy points scored on the Superspeedways in 2018)

Erik Jones was not very good at the flat tracks (Phoenix, Richmond, Martinsville and Loudon) last year. He only had one finish in the top 10 (Phoenix) in the seven flat track races. Jones has been pretty good at Phoenix (finished three of his five races in the top 10) and Toyota should have an advantage early in the season. I would consider him for your fantasy team in the first race in the desert and fade him in the other flat track races. (Erik Jones ranked 15th in fantasy points scored on the flat tracks in 2018)

Erik Jones is at his best at the steep tracks (Bristol, Dover and Darlington). Darlington ranks as his best track. He has two career starts at the Lady in Black and he finished 5th and 8th. He is also very good at Bristol. Jones should have won the night race at Bristol in 2017. He led a series-high 260 laps and finished second. He also finished 5th in the night race last year. Jones is also good at Dover. Last year he qualified 16th and finished 4th in the playoff race at the Monster Mile. Make sure Jones is in all fantasy lineups on the steep tracks. This type of racing suites him well. (Erik Jones ranked 11th in fantasy points scored on the steep tracks in 2018)

Erik Jones spent a lot of time with Kyle Busch and Denny Hamlin in the simulator last year, trying to figure out how to navigate the road courses. He is a quick learner. Jones finished 7th at Sonoma and 5th at Watkins Glen. He was caught up in a wreck at the Charlotte Roval but he was running 6th when the entire field decided to follow Brad Keselowski into the wall. Jones will be a good fantasy pick at the road courses but I would save him for other tracks in allocation games. His starts are too important to use at the road courses. (Erik Jones ranked 13th in fantasy points scored on the road courses in 2018)