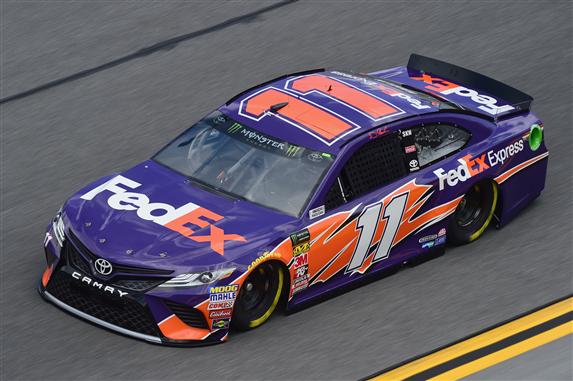 2018 RECAP: Denny Hamlin had a better fantasy season then he did in real NASCAR. For the first time since 2005, Hamlin failed to win a race. That is unacceptable for a driver with his experience in one of the best cars. Hamlin was able to finish 10 races in the top five (27%), 17 races in the top 10 (47%) and won four poles (Watkins Glen, Michigan, Darlington and Homestead). He was only able to led 380 laps all season. This was one of his worst seasons in the Cup Series. He should bounce back in 2019. (Denny Hamlin ranked 11th in fantasy points scored in 2018)

2019 Preview: Denny Hamlin was the third-best driver at Joe Gibbs Racing last year. He was not even in the same racetrack as Kyle Busch. The team needed to do something to get Hamlin back on track in 2019 so crew chief Mike Wheeler was sent to the No. 95 team (Matt Dibenedetto) and Chris Gabehart was brought in to work with Hamlin this season. Gabehart was the crew chief for Brandon Jones in the Xfinity Series last year. He also served as the crew chief for Hamlin in one race in 2017. In that race at Richmond, Hamlin qualified 2nd and finished 5th. Maybe this will be the spark Hamlin needs in 2019.

There is a lot of pressure on Hamlin to succeed this season. Christopher Bell is dominating the Xfinity Series and his patience is running out. Joe Gibbs Racing needs to find a seat for Bell and the No. 11 car may be his if Hamlin does not produce. Hamlin has two more seasons on his contract so if he can get to the final four, he should be safe for one more year. If he finishes outside the top 10 again, Bell and FedEx will be the new combination in 2020.

Joe Gibbs Racing always has an advantage over the competition at the intermediate tracks because of the ability to spend money to perfect the down-force for their cars. You would expect all of the JGR drivers to finish in the top 10 at these tracks but that was not the case for Hamlin. He had a 12.5 average starting position and a 17th-place average finishing position on the 1.5-mile tracks last season. That is not very good for a JGR driver. He did finish 4th at Atlanta, 5th at Kansas and 3rd at Charlotte but he also finished outside the top-10 in seven of the 11 races. JGR should have a down-force advantage in 2019, so I expect Hamlin to have a more consistent season at these tracks. (Denny Hamlin ranked 12th in fantasy points scored on the intermediate tracks in 2018)

Denny Hamlin is one of the best drivers on the Superspeedways (Daytona and Talladega). He has one Daytona 500 win on his resume and a win at Talladega. He consistently runs up front at these tracks, leads laps, but he can be inconsistent. Hamlin has finished 38th, 3rd, 24th and 7th in his last four races at Daytona. He finished 4th, 14th, 6th and 11th in his last four races at Talladega. He is a good driver to take a chance on in the Driver Group Game, but just realize he will probably finish in the top five or crash out of the race.  (Denny Hamlin ranked 4th in fantasy points scored on the Superspeedways in 2018)

Three of the best tracks for Denny Hamlin are flat tracks (Phoenix, Richmond, Martinsville and Loudon). Hamlin has five wins at Martinsville, three wins at Richmond, three wins at Loudon and one win at Phoenix. That means 38% of his 31 wins have come on the flat tracks. He always runs well in his home state of Virginia. Hamlin should be on all fantasy teams when the Cup Series competes at Richmond and Martinsville. He should also be highly considered for Loudon. I would rather have his teammate (Kyle Busch) at Phoenix. (Denny Hamlin ranked 6th in fantasy points scored on the flat tracks in 2018)

Denny Hamlin has been really good at Darlington and Dover but struggled at Bristol. The Track Too Tough to Tame ranks as his third-best track. He won at Darlington in 2017 and he has finished four consecutive races at the Lady in Black in the top 10. Hamlin should be on all fantasy teams at Darlington. He also has value at Dover. Hamlin finished 2nd and 7th in his two races at the Monster Mile last year. This is historically one of the better tracks for Joe Gibbs Racing. Hamlin will be a good sleeper pick in Daily Fantasy Sports (DFS) at Dover. Bristol ranks as his 13th-best track. There are more consistent drivers who would be better picks for your fantasy team in Thunder Valley. (Denny Hamlin ranked 10th in fantasy points scored on the steep tracks in 2018)