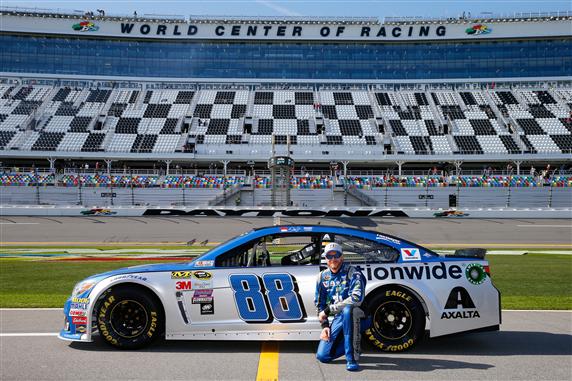 The 2017 NASCAR season is right around the corner. In order to get fantasy teams ready for the new season I decided to recap the 2016 season for my top 30 drivers and preview how I think they will perform this year. Each day I will post two driver previews until my No. 1 fantasy driver is revealed. I will continue my rankings with Dale Earnhardt Jr.

2016 RECAP: Did it feel like something was missing last year? The 2016 season did not feel right without an Earnhardt on the track. Dale Earnhardt Jr. was off to a good start last year until he suffered another concussion at Kentucky. Earnhardt did the right thing and put his health ahead of his racing career. I hope he has a full recovery and a safe season in 2017.

Earnhardt competed in 18 races last year. He finished in the top five in five of the races (Atlanta, Phoenix, Texas, Bristol and Pocono). The interesting stat about his top-five finishes is that four of them were second-place finishes. Earnhardt could have easily had multiple wins and been leading the Point Standings if a couple of breaks would have went his way. He was a strong fantasy performer when he was in the car.

Another surprising stat about Earnhardt in 2016 is that he was the worst driver in the series on the Superspeedways (Daytona and Talladega). He had a great car but also had terrible luck. Earnhardt finished 36th in the Daytona 500, 40th at Talladega and 21st in the Coke 400 at Daytona. Throw these stats out the window because we all know that Earnhardt is still one of the best drivers at the Superspeedway tracks.

Jeff Gordon and Alex Bowman filled in for Earnhardt in the remaining 18 races. The two drivers were able to keep the No. 88 car near or in the top 10 for most of the races. This shows the strength of this team. I expect them to be strong again in 2017.

2017 PREVIEW:  The most important thing for Earnhardt in 2017 is to stay healthy. There is no doubt that the No. 88 car will be one of the fastest on the track, but the last thing his fans want to see is another driver behind the wheel. Usually when drivers miss multiple races they come back more motivated than ever to win races (See Kyle Busch’s stats in 2015). I expect the same from Earnhardt this year. I would not be surprised to see him win multiple races in the upcoming season, beginning with the Daytona 500 in February.

Yahoo Fantasy placed Earnhardt into Group A for the 2017 season. His statistics in his 18 races last year suggest he belongs in this group, but I had a feeling they were going to place Earnhardt in Group B and Chase Elliott in Group A. That did not happen. Earnhardt would have had more value in Group B, but he will still be one of the top picks at the Superspeedways (Daytona and Talladega), Pocono, Las Vegas and Atlanta.

I would expect Earnhardt to be priced somewhere near $25 in Fantasy Live. I consider him an elite driver at most tracks in this game because of his ability to score bonus points for position differential. I like to build my teams with three studs and two value picks. Earnhardt will be one of the studs if his price is right.