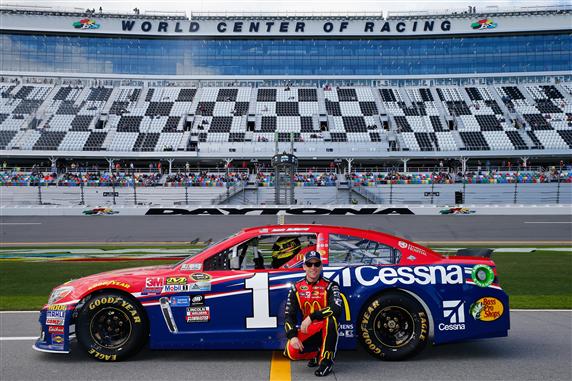 2017 RECAP: Jamie McMurray had one of his best seasons ever in the MENCS. His 17 finishes in the top 10 were the most he has had since 2004. McMurray ranked 11th in fantasy value last year. The only thing holding McMurray from being an elite fantasy pick last year was his inability to lead laps. McMurray only led 21 laps in 2017 and 13 of them came in the Daytona 500. It was a good year for the No. 1 team but it could have been better if they led some more laps.

2018 Preview: All of the pieces will be in place for Jamie McMurray to have another good season. Matt McCall will once again be calling the shots on top the pit box. The team added Doug Duchardt from Hendrick Motorsports to oversee both of the Chip Ganassi teams. Duchardt is one of the experts in NASCAR and should add to the fantasy value of McMurray this season. Chevy switched to the Camaro chassis for the 2018 season. Usually when a manufacturer introduces a new car their teams start off slow. I expect the same for Chip Ganassi Racing. But once they get the aerodynamics of the new car figured out the No. 1 team should have a lot of success. McMurray is at his best at the 2-mile ovals, the flat tracks and many of the 1.5-mile ovals.

Jamie McMurray was one of the biggest surprises on the Intermediate tracks (1.5-mile and 2-mile ovals) in 2017. McMurray ranked 8th in fantasy value at these tracks. He had 10 finishes in the top 10 at these tracks. His average finishing position was 10.8. I expect McMurray to be one of the best sleeper picks at these tracks again in 2018. His best tracks are Michigan, Auto Club, Kentucky, Las Vegas and Homestead. Make sure you consider McMurray for your team when the series visits these tracks.

Historically the Superspeedways (Daytona and Talladega) have been the best tracks for McMurray. He only has seven wins on his resume and four of them came at the restrictor-plate tracks. McMurray has two wins at Daytona (2007 and 2010) and two wins at Talladega (2009 and 2013). McMurray ranked 12th in fantasy value at these tracks in 2017. His best finish was 2nd at Talladega in the spring race. McMurray will be a good pick for your fantasy team at Daytona and Talladega as long as his price is reasonable in Fantasy Live and DraftKings.

Jamie McMurray was an average driver on the Flat tracks (Phoenix, Richmond, Martinsville and Loudon) in 2017. McMurray ranked 14th in fantasy value at these tracks. He was horrible at Martinsville (finished 29th and 38th) but he had some success at Phoenix (finished 6th in November) and at Richmond (finished 6th in April). McMurray has a lot more value at the larger tracks so unless he qualifies up front and runs some fast laps in practice; I would other drivers for your team at these four tracks.

Jamie McMurray is one of the safest picks when the MENCS visits the Steep tracks (Bristol, Dover and Darlington). McMurray ranked 10th in fantasy value at these tracks in 2017.  He finished both races at Dover in the top 10 and he has an average finishing position of 10.6 the last two seasons at Bristol. Darlington ranks as the 2nd-best track for McMurray. He started 5th and finished 10th at the Track Too Tough To Tame last year. McMurray can be considered for your fantasy team at any of these tracks in 2018.