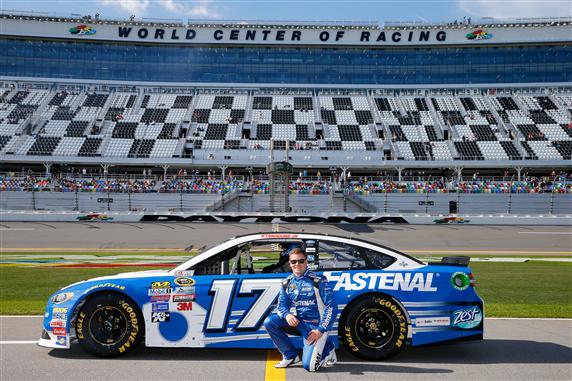 2017 RECAP: Ricky Stenhouse Jr. had his best season in the MENCS. No one expected Stenhouse to win two races last year. He made the playoffs for the first time but did not make the most of his opportunity. Stenhouse was eliminated in the first round but the team should consider the 2017 season a success. Stenhouse won one pole (Talladega) and had nine finishes in the top 10. I would love to rank Stenhouse higher this season but the competition is tough and I feel the Fords will be at a disadvantage in 2018 in the Fusion Chassis.

2018 Preview: Everything will be the same with the No. 17 team at Roush Fenway Racing. Brian Pattie will be calling the shots on top the pit box and the team will be running the Roush-Yates engines. These cars have an advantage on the Superspeedway because of the horsepower they are able to produce but the Ford Chassis should be behind Toyota and Chevy when it comes to downforce. Stenhouse will be the best pick for Fantasy NASCAR at the Superspeedways and he will be very good at Bristol and Auto Club. Stenhouse is one of the drivers I plan to fade early in the season and wait until after Charlotte to see if he can run up front.

Ricky Stenhouse Jr. did not perform very well on the Intermediate tracks (1.5-mile and 2-mile ovals) in 2017. Stenhouse ranked 20th in fantasy value at these tracks. His only top-10 finish came at Michigan. That was not a surprise because Roush Fenway Racing usually runs well at Michigan and Stenhouse has had success on the 2-mile tracks in his career. I would consider Stenhouse for your fantasy team at Auto Club and Michigan but I would fade him at the 1.5-mile tracks.

Now that Dale Earnhardt Jr. retired Ricky Stenhouse Jr. has a real good chance to take over the crown as the best driver at the Superspeedways (Daytona and Talladega). Stenhouse ranked 7th in fantasy value last year. He won the May race at Talladega and the July race at Daytona. Stenhouse has finished four of the last six races at these two tracks in the top five. He should be on every fantasy team when the MENCS competes at the Superspeedways.

Ricky Stenhouse Jr. is known more for his skills on the Steep tracks then he is on the Flat tracks (Phoenix, Richmond, Martinsville and Loudon), but he did have some success in 2017. Stenhouse ranked 20th in fantasy value at these tracks last year. His average finishing position in the eight races at these tracks was 10.5. That is not bad. Stenhouse will be a good sleeper pick at these tracks in 2018 because downforce is not as much of a factor in these races.

There is something about Bristol that brings the best out of Ricky Stenhouse Jr. It is by far his best track. Stenhouse has an average finishing position of 9.25 in his last eight trips to Thunder Valley. Stenhouse should be on all Fantasy NASCAR teams when the MENCS races at Bristol.

Stenhouse’s success at Bristol has not translated into top-10 finishes at Dover. Stenhouse only has one finish in the top 10 in his 11 races at the Monster Mile. He is not very good at Darlington as well. My advice is to use Stenhouse at Bristol and fade him at Dover and Darlington.

Two of the worst tracks for Ricky Stenhouse Jr. are the two Road Course tracks (Sonoma and Watkins Glen). His average finishing position at Sonoma is 28.4 and his average finishing position at Watkins Glen is 30.67. Almost any driver in the field would be a better choice for your fantasy team then Stenhouse at the Road Courses.