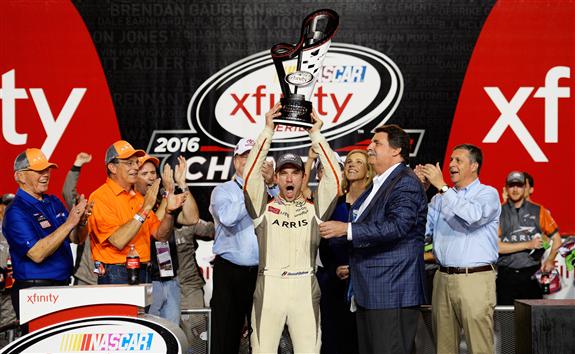 The 2017 NASCAR season is right around the corner. In order to get fantasy teams ready for the new season I decided to recap the 2016 season for my top 30 drivers and preview how I think they will perform this year. Each day I will post two driver previews until my No. 1 fantasy driver is revealed. I will continue my rankings with a driver who was not expected to compete in the monster Energy NASCAR Cup Series in 2017, Daniel Suarez.

2016 RECAP: Daniel Suarez competed in his second full season in the Xfinity Series last year. After finishing fifth in the Point Standings in 2015, Suarez took home the championship trophy in 2016. Suarez won three races (Michigan, Dover and Homestead), had 19 finishes in the top five and 27 finishes in the top 10. His average starting position was 3.9 and his average finishing position was 7.9. He was the most dominant full-time driver in the Xfinity Series.

2017 PREVIEW: Suarez has never competed in the Monster Energy NASCAR Cup Series, and his run for the Rookie of the Year trophy in 2017 was a surprise. Suarez will drive the No. 19 Arris Toyota for Joe Gibbs racing. He will have big shoes to fill as he takes the place of Carl Edwards in the seat of the car. Suarez will have a great crew chief (Dave Rogers), the best teammates (Kyle Busch, Matt Kenseth and Denny Hamlin) and the best pit crew to work with in 2017. Talking about setting a driver up to succeed… Suarez has everything going for him this year.

Suarez will be a good choice in Fantasy Live depending on where he is priced in the game. I expect him to be priced around $20 to start the reason. Many fantasy players may go with more veteran options at this price, but it is hard to argue not taking a driver from Joe Gibbs racing at a discounted price.

Yahoo Fantasy Auto Racing has not placed Suarez in a group yet. As soon as the official entry list for the Daytona 500 is released I expect Suarez to be in Group C. He will have tremendous value in this group. Every fantasy team should have no problem using nine allocations with Suarez in 2017. My advice is to use Erik Jones early and start using Suarez at the race in Dover. It could take him a few races to get comfortable with his new team and new competition.