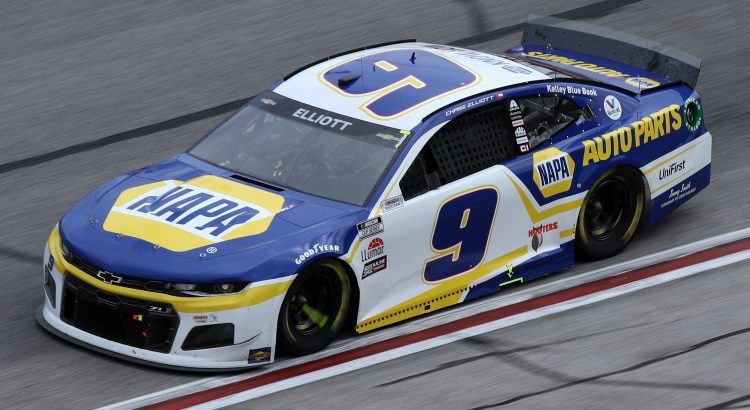 2021 RECAP: Chase Elliott tried to back up his 2020 NASCAR Cup Series Championship with another title in 2021. He almost got the job done. Elliott once again made it to the Championship FOur but a fifth-place finish at Phoenix was not enough for Elliott to take home the trophy. The No. 9 team still had a great season.

Hendrick Motorsports was the most dominant team in 2021. Chase Elliott ran well at all types of tracks and adding seven Road Courses to the schedule really helped him out. Elliott finished four of the seven Road Course races in first or second place. He probably would have won four of the seven races if his teammate (Kyle Larson) was not so good. Overall, it was another good season for Elliott in the Cup Series.

2022 PREVIEW: The battle between Chase Elliott and Kyle Larson could end up being like the battle between Jeff Gordon and Jimmie Johnson at Hendrick Motorsports. These two young drivers have a lot of talent and Hendrick Motorsports has a lot of speed. NASCAR will run nearly 20% of its schedule on Road Courses and that really helps out Elliott’s fantasy value. He is the best driver at these tracks and if he improves on the Large Ovals, it could be a dominating season for the No. 9 team.

If it is not broke, don’t fix it. Everything will be the same for the No. 9 team in 2022. Alan Gustafson will once again serve as the crew chief and NAPA Auto Parts will serve as the primary sponsor. Gustafson is arguably the best crew chief in the garage and he works well with Elliott. The only change for Hendrick Motorsports will be with the car. I expect the Toyota’s to have the advantage early in the season because of the engineering for Toyota Racing Development (TRD), but it will not take long for Hendrick Motorsports to catch up. Elliott and his teammates should start winning a lot of races when the Cup Series returns from the west coast in late March.

* The drivers value at each track type this year is based on how he performed over the past three seasons at each specific type of track since the NEXGEN car will not driver like the GEN-6 car (used last season).

Chase Elliott had a good season on the Large Ovals last year. He scored the fifth-most points in Fantasy Live, the Driver Group Game and in DFS contests. The best Large Oval for Elliott was Kansas. Elliott finished second and fifth in the two races in the Heartland. The No. 9 car was also really good in the Coca-Cola 600 at Charlotte. Elliott finished second in the marathon race last year. It is his third consecutive top-two finish in the race.

Chase Elliott will have more value in DFS than he will in season-long games (Fantasy Live and the Driver Group Game) at the Large Ovals. We have limited allocations with each driver in the season-long games and we need to use Elliott at all of the Road Courses (six races). That leaves only a few allocations for the rest of the tracks. Elliott can be considered for season-long games for Charlotte and Kansas, but I would save his starts at the other Large Oval tracks. There is no limit in uses in DFS, so Elliott can be use at all of the Large Oval tracks in DraftKings and FanDuel contests.

(Chase Elliott ranked 6th in fantasy points scored on the Intermediate Tracks over the past three seasons with an average finishing position of 11.1)

The worst tracks historically for Chase Elliott have been the Superspeedways but he has had a lot of success at Daytona recently. Elliott finished second in the Daytona 500 last year and he finished second at Daytona in 2020. His 9.6 average finishing position at Daytona over the last two seasons is second-best in the Cup Series. His allocations are too valuable at the shorter tracks to be used at the Superspeedways in season-long games though. Elliott will only have value in DFS contests at Daytona if he qualifies outside the top-20 with a chance to score place differential points.

Chase Elliott won at Talladega in 2019 but this is one of his worst tracks. Elliott finished 18th and 24th in the two races at Talladega last year. You need a top-five finish every time you use Elliott in your season-long games. It is too risky to use an allocation with the No. 9 car at Talladega.

(Chase Elliott ranked 2nd in fantasy points scored on the Superspeedways over the past three seasons with an average finishing position of 13.1)

Chase Elliott had some success at the Flat Tracks in 2021. The No. 9 car scored the fifth-most points in Fantasy Live and the Driver Group Game and the fourth-most points in DFS contests at the Flat Tracks. It could have been a lot better though. Elliott finished 13th at Nashville but his car was disqualified after the race and Elliott was credited with a 39th-place finish.

Chase Elliott finished second at Martinsville, fifth in both races at Phoenix and fourth at Richmond. He led 413 laps and scored 56 Stage Points at the Flat Tracks last year. The best Flat Track for Elliott is Martinsville. The No. 9 car will be a good pick in both season-long and DFS contests when the Cup Series travels to Martinsville for hot dogs and hot racing.

Chase Elliott was hit or miss on the Steep Tracks last year. He finished third at Dover and seventh at Darlington. He also finished 25th at Bristol and 31st in the second race at Darlington. It was a surprise to see Elliott finish in the top-10 in the Bristol Dirt Race, but he is working hard to improve his skills behind the wheel on dirt.

Chase Elliott has too much value on the Road Courses and the Large Ovals to be used on the Steep Tracks in season-long games in 2022. Elliott is typically one of the higher-priced drivers in DFS contests. He must score dominator points in order to have value in DFS contests. Elliott led 129 laps at Bristol last year but he did not lead any laps at Dover or Darlington. Elliott will have some value in DFS contests in the Bristol Night Race if he looks fast in practice. He does not score enough dominator points at Dover or Darlington to justify paying up for the No. 9.

(Chase Elliott ranked 8th in fantasy points scored on the Steep Tracks over the past three seasons with an average finishing position of 17.4)

(Chase Elliott ranked 1st in fantasy points scored on the Road Courses over the past three seasons with an average finishing position of 6.4)