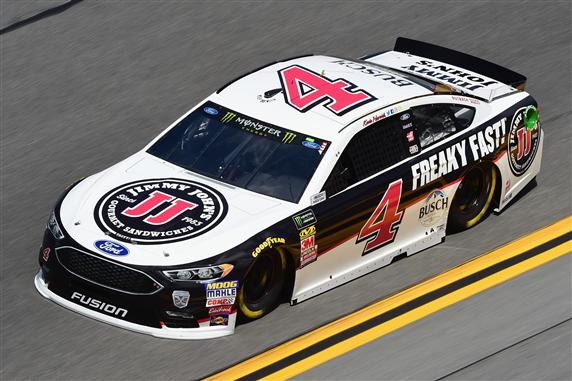 2018 RECAP: Kevin Harvick was the No. 1 driver in Fantasy NASCAR in 2018. He won the most races (8 races tied Kyle Busch for lead), had 23 finishes in the top five (64% of the races), 29 finishes in the top 10 (80% of the races), won four poles (Second-most in the Cup Series) and led 1,990 laps (Most in the Cup Series). Harvick was great every type of track. He finished 3rd in the point standings but 1st in fantasy value. The amount of points he scores for our fantasy team is what matters the most. Harvick is good at scoring fantasy points. (Kevin Harvick ranked 1st in fantasy points scored in 2018)

2019 Preview: 2019 will be the final year for Kevin Harvick’s contract with Stewart-Haas Racing. He is 43 years old, but he should get an opportunity to drive the No. 4 car in 2020 if he wants it. Harvick will once again be paired with crew chief Rodney Childers. Although he blocked me on Twitter, he is still one of the best crew chiefs in the garage. The biggest change for the No. 4 team in 2019 will be the chassis. Ford will switch to from the Fusion to the Mustang this season. Ford has been working on this car for two years. I do not expect the change to slow down Harvick this year.

Kevin Harvick has not won at a Superspeedway (Daytona or Talladega) since 2010. That year he won at both Daytona and Talladega. Daytona ranks as his worst track. His average finishing position in his last five races at Daytona is 28.8. Talladega ranks as his third-worst tack. His average finishing position in his last four races at Talladega is 18.75. Harvick’s allocations in the Driver Group Game are too important to use at the Superspeedways. He usually qualifies too well to be used in Daily Fantasy Sports (DFS). I would find safer picks for your fantasy team at these two tracks. (Kevin Harvick ranked 14th in fantasy points scored on the Superspeedways in 2018)

Kevin Harvick is the master when it comes to flat track (Phoenix, Richmond, Martinsville and Loudon) racing. Harvick has nine wins at Phoenix. He has finished in the top two at the track nine times since 2012. He must be on all fantasy teams when the Cup Series competes in the desert. Harvick also has three wins at Richmond and three wins at Loudon. Harvick won the race at the Magic Mile last year. It was his second trip to Victory Lane in the last two seasons. Harvick finished 2nd and 5th in his two races at Richmond. Although he did not win, Harvick was able to win the pole in the fall race and lead laps in both races. Martinsville is the only flat track where I would fade Harvick. He has been good at Martinsville but Kyle Busch and the Team Penske drivers have been better. (Kevin Harvick ranked 3rd in fantasy points scored on the flat tracks in 2018)

Kevin Harvick has been very consistent on the steep tracks (Bristol, Dover and Darlington). He has finished seven consecutive races at Bristol in the top 10, including a trip to Victory Lane in 2016. He is a better choice in the Driver Group Game in Thunder Valley then he is in Daily Fantasy Sports (DFS). You must lead laps in DFS at Bristol and Harvick only led 22 in his last four races. Harvick won at Dover last year and finished 6th in the fall race. He led 452 laps in the two races and scored the most fantasy points. Harvick must be on all fantasy teams at Dover. Harvick has also been reliable at Darlington. He has a 4.2 average finishing position at the Lady in Black since joining Stewart-Haas Racing. (Kevin Harvick ranked 1st in fantasy points scored on the steep tracks in 2018)

Kevin Harvick is at his best at Sonoma. He considers the Northern California track as his home course. He won at Sonoma in 2017 and finished second last year. His success at Sonoma has not translated into positive runs at Watkins Glen. His average finishing position in upstate New York is 19.6 since 2015. Last year Harvick qualified 19th and finished 9th in the inaugural Charlotte Roval race. He ran well but there are better drivers for your fantasy team at the track. I would use Harvick at Sonoma and fade him at the other two road courses in 2019. (Kevin Harvick ranked 7th in fantasy points scored on the road courses in 2018)