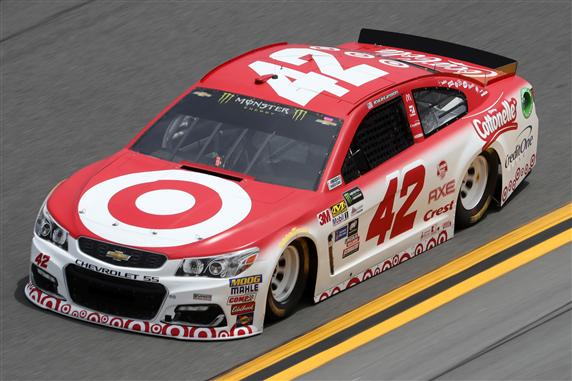 2017 RECAP: Kyle Larson was one of the best drivers for your fantasy team in 2017. He won four races (Auto Club, Michigan twice and Richmond). Larson also had 20 finishes in the top 10 in the 36 races and he led 1,352 laps. As great as the season was, it could have been a lot better. The No. 42 car faded in the playoffs. Larson only had one finish in the top 10 in the last six races (including 4 DNFs). Larson is one of the bright stars in the sport and his four wins in 2017 are just the beginning of what should be a great career in NASCAR.

2018 Preview: Kyle Larson will be the biggest threat to Martin Truex Jr. as the best Fantasy NASCAR Driver in 2018. Larson was one of the most dominant drivers in 2017 until he slumped in the playoffs. He has said in multiple interviews this off-season that he is very focused and excited to get back on the track.

Larson said he learned two things in 2017 that will really help him this year. He learned how to dig deep and find a little extra speed to turn his 2nd-place finishes into wins and he learned how to outrace the competition on the restart. Larson finished 2nd in 8 races last year. If he could have found a way to turn them into wins he would have visited Victory Lane 12 times in 2017!! Larson had to beat out Martin Truex Jr. in late race restarts at Richmond and Michigan. If he can turn his 2nd-place finishes into wins and improve his restarts, he could be the best pick in Fantasy NASCAR this season.

The theory of “If it is not broke do not fix it” does not apply to the No. 42 team. After a bad finish to the 2017 season, Chip Ganassi Racing brought in former Hendrick Motorsports executive Doug Duchardt to oversee the operations of the team. They also brought in Max Jones and Mike Hull from the Indy Series teams at Chip Ganassi Racing to help manage the team. It seems like Chip Ganassi is going all in this season. He is bringing the best minds in racing together to make sure the No. 42 car runs up front.

The car will look a lot different too. Credit One will replace Target as the primary sponsor for the No. 42 car. The chassis will be changed from the Chevy SS to the Camaro. The word in the garage is that the Camaro has very good aerodynamics and should give the Chevys and advantage in 2018. This could help close the gap between Larson and the Toyota drivers.

Kyle Larson is one of the best drivers for your team on the Intermediate tracks (1.5-mile and 2-mile ovals). He ranked 3rd in fantasy value at these tracks in 2017. You must have Larson on your team at Auto Club and Michigan. He has won three consecutive races at Michigan and the last race at Auto Club. No driver in the sport is better than Larson at the 2-mile tracks. He is also the best driver in the field at Homestead. Larson can be used at any of the Intermediate tracks but makes sure he is on your team at Michigan, Auto Club and Homestead.

Kyle Larson came very close to winning the Daytona 500 last year. He was leading the race with one lap to go. Larson went low to block and the rest of the field went high to pass him. He is starting to learn how to be a very good restrictor-plate driver. It is hard to justify paying up for him in salary cap games and you definitely do not want to burn an allocation with him in a game which restricts the amount of times you can use a driver throughout the season. Larson should run well in these races, but his value at other tracks and his price tack away from his fantasy value.

Kyle Larson was one of the best drivers on Flat tracks (Phoenix, Richmond, Martinsville and Loudon) in 2017. He ranked 2nd in fantasy value last year. His best track was Loudon. Larson finished both races in the Granite State in 2nd place. Loudon ranks as his 3rd-best track. He was also good at Richmond and Phoenix. Larson won the fall race at Richmond and finished 2nd at Phoenix in the spring. The only track I would fade him at is Martinsville. The paperclip-shaped track does not suite his driving style. Larson has a 17.7 average finishing position at the track.

Kyle Larson is a good pick for your fantasy team at the Steep tracks (Bristol, Dover and Darlington). The Monster Mile is his best Steep track. Larson has an average finishing position of 7.8 at the track and he led 378 laps in the two races last year. Make sure Larson is on your team at Dover. He has been hit or miss at Bristol and Darlington. Keep an eye on him in practice and qualifying. If he starts up front, make sure he is in your lineup.

Kyle Larson is a lot better at going around in a circle then he is at navigating a Road Course (Sonoma, Watkins Glen and Charlotte Roval). Larson only has one finish in the top 10 in his eight races on the Road Courses. There are better drivers for your fantasy team at these tracks.