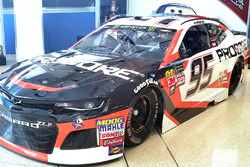 2017 RECAP: Kasey Kahne did something in 2017 that he had not done in a long time… He won a race. Kahne did not have a great season last year but he was able to make the playoffs and that is more then what most people expected. Kahne had six finishes in the top 10 (Daytona, Atlanta, Talladega, Indianapolis, Charlotte and Talladega). He was at his best on the Superspeedways and once again ran well at his favorite track in Charlotte.

Fantasy teams should expect a decline in fantasy value from Kahne in 2018. If Kahne could not run up front consistently in Hendrick Motorsports cars, it will be hard to imagine he can do it at Leavine Family Racing. Last year Michael McDowell had some success in the No. 95 car and I expect the same from Kahne. He will have a few top-10 finishes but most of the races he will run outside the top 15.

Fantasy teams got the most out of Kasey Kahne on the Superspeedways (Daytona and Talladega) last year. He ranked 8th in fantasy value at these tracks. Kahne finished 7th in the Daytona 500 and 18th in the July race at Daytona. Kahne finished both races at Talladega in the top eight (5th in May and 8th in October). If Kahne is going to win a race in 2018 it will probably be at either Daytona or Talladega. He is a good fantasy driver for your team at these tracks.

Kasey Kahne did not set the track on fire at the flat tracks (Phoenix, Richmond, Martinsville and Loudon) in 2017. He had a couple of top-20 finishes but no finishes in the top 10. Kahne ranked 20th in fantasy value at these tracks last year. If he is going to have any success this season it will probably happen at Richmond. Kahne has an 11.3 average finishing position in the last six races at Richmond.

Fantasy teams can consider Kasey Kahne when the MENCS visits the Steep tracks (Bristol, Dover and Darlington). The Monster Mile ranks as the best track for Kahne and he has had some recent success at Darlington as well. Although he has won a race at Bristol before, he did not finish either race inside the top 20 last year. Kahne has a lot of fantasy value at Dover, a little at Darlington and I would fade him at Bristol.