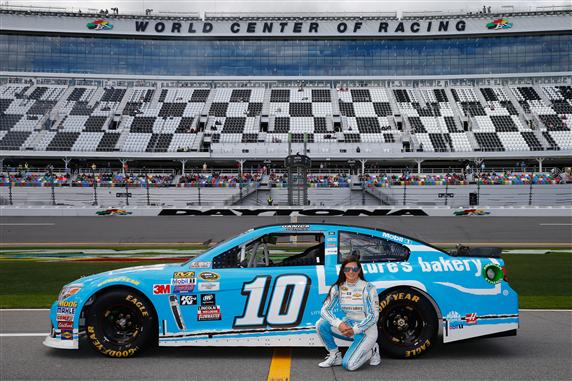 2016 YAHOO POINTS: 1,764 (RANKED 24TH)
The 2017 NASCAR season is right around the corner. In order to get fantasy teams ready for the new season I decided to recap the 2016 season for my top 30 drivers and preview how I think they will perform this year. Each day I will post two driver previews until my No. 1 fantasy driver is revealed. I will continue my rankings with one of the most popular drivers in NASCAR, Danica Patrick. Most people either love her or hate her, but as a fantasy driver she will have limited value in 2017.

2016 RECAP: Danica Patrick completed her fourth full-season in the Sprint Cup Series last year. It was her second consecutive season finishing 24th in the Point Standings. Patrick did not have any top-five or top-10 finishes in 2016 and she only led 24 laps. Her best tracks in 2016 were the flat tracks (Phoenix, Martinsville, Richmond and New Hampshire). Patrick scored the 15th most points in Fantasy Live (243.5 points) on these tracks.

Patrick did not have much use in the Fantasy Live game in 2016 because of her price. She was priced between $14 and $18 for most of the season. That was too expensive for a fourth driver and there were better options for your third driver in Fantasy Live.

Here best value was in DraftKings. One of the misconceptions about Patrick is that she wrecks all of the time. The reality is that she seldom causes her own wrecks. She is one of the most boring drivers to watch race because she never takes any chances and she usually stays in one spot for most of the race. She only had 3 DNFs in 2016. DraftKings usually sets the price on Patrick low, so she has a lot a value since she stays out of trouble.

Patrick did not have much value in the Yahoo fantasy game last year because she was placed in Group B. Her best races were at Martinsville (16th), Dover (13th), New Hampshire (14th), Richmond (15th) and Charlotte (11th).

2017 PREVIEW: The only change for Patrick in 2017 will be the switch from Chevy to Ford. She will still have Billy Scott as her crew chief and Nature’s Bakery as her primary sponsor. I doubt much will change for Patrick on the track as well. She will continue to qualify outside the top 12 and finish inside the top 25. Patrick will have a handful of races where she finishes inside the top 15, but predicting where those races will occur will be difficult. Her best tracks are Atlanta, Kansas, Michigan, Bristol and Dover.

Patrick probably will not have much value in Fantasy Live in 2017. Her name will cause the game to price her higher than what her value is. The only way I could see using the No. 10 car in Fantasy Live is if her price was under $13. I doubt that will happen, so I recommend finding better options (Erik Jones / Daniel Suarez / Ty Dillon).

A lot of people have been complaining that Patrick should be in Group C in the Yahoo fantasy game. If she was placed in Group C I could make an argument to use her in the game. Patrick was placed into Group B this season and she will have no value in 2017. The only tracks I would consider using her is at the Superspeedways, but I still think there are better options. There are enough good drivers in Group B to get you through the season without having to use Patrick.

It will be another boring year for Patrick in fantasy NASCAR games. She will not offer much upside and her downside will be low. I like to choose drivers who have an opportunity to finish in the top 10 for my teams. Patrick is not one of those drivers.