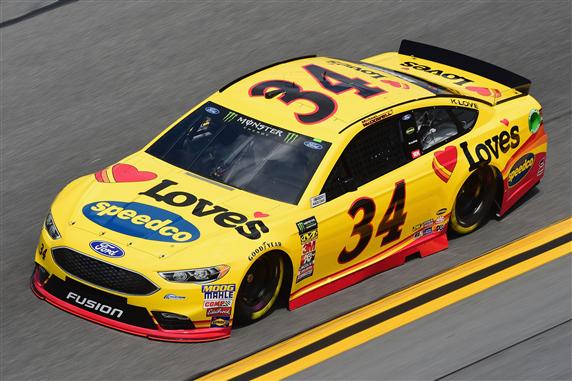 McDowell got off to a slow start in 2018. He finished six of the first nine races outside the top 25. Front Row Motorsports entered an alliance with Roush-Fenway Racing halfway through the 2018 season and it seemed to kick start the performance of the No. 34 car. McDowell was at his best on the Road Courses and some of the intermediate tracks. He was also able to finish 9th in the Daytona 500. (Michael McDowell ranked 29th in fantasy points scored in 2018)

2019 Preview: Everything will be the same for the No. 34 team in 2019. Michael McDowell will return as the driver, Derrick Finley will serve as the crew chief and the team will continue to receive cars from Roush-Fenway Racing with Roush-Yates engines. The only change is that Front Row Motorsports expanded to a three-car team in 2019. Now McDowell will have David Ragan and Matt Tifft as teammates to get information from.

Michael McDowell has been one of my sleeper picks on the Superspeedways (Daytona and Talladega) for the last three seasons and that will not change in 2019. He finished 9th in the Daytona 500 and then got caught up in late race wrecks in the other three races. I expect him to bounce back in 2019. McDowell is a lot better at Daytona than he is at Talladega. His average finishing position in the last six races at Daytona is 13.1. He will be a good pick for the Driver Group Game, DFS and One & Done games at the two races in Daytona. (Michael McDowell ranked 23rd in fantasy points scored on the Superspeedways in 2018)

Michael McDowell did not have much success at the flat tracks (Phoenix, Richmond, Martinsville and Loudon) in 2018. He is at his best at his home track in Phoenix. McDowell finished 16th in November at Phoenix but he struggled at the other flat tracks. McDowell finished 24th and 31st at Richmond, 21st and 25th at Martinsville and 26th at Loudon. I would not recommend McDowell in any game where you need to set your lineup before practice and qualifying. If he posts consecutive fast laps in practice, McDowell will be worth a spot on your team at the Phoenix. If he struggles or qualifies poorly, I would stay away from him. (Michael McDowell ranked 29th in fantasy points scored on the flat tracks in 2018)

Michael McDowell really struggled at Bristol and Dover last year but he was decent at Darlington. McDowell finished 37th and 38th in his two races in Thunder Valley. He finished 22nd and 26th in his two races at the Monster Mile. McDowell did have some success at these tracks in the past so there is some hope for him in 2019. McDowell has posted back-to-back top 20 finishes at Darlington so he is a sleeper pick you will want to keep on your radar at the Track Too Tough to Tame. (Michael McDowell ranked 29th in fantasy points scored on the steep tracks in 2018)

Make sure Michael McDowell is on your fantasy teams at the Road Courses. He is a great value in salary cap games and one of the best picks in the Driver Group Game at these tracks. McDowell has an average finishing position of 16.6 over the last two seasons on the Road Courses. Last year McDowell finished 18th at the Charlotte Roval and at Watkins Glen and he finished 21st at Sonoma. His cheap price makes him a good pick in DFS. You can also use him at Watkins Glen in a One & Done game. (Michael McDowell ranked 20th in fantasy points scored on the road courses in 2018)