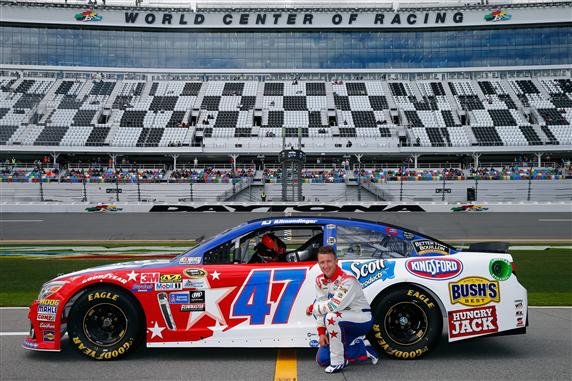 2017 RECAP: AJ Allmendinger has been with JTG Daugherty Racing for four seasons and last year was his worst. He finished 13th, 22nd and 19th in the point standings in his first three seasons with the team but was only able to finish 27th in the MENCS standing in 2017. I doubt the addition of a second car to JTG Daugherty Racing was the primary reason for Allmendinger’s decline. I think the talent level in the MENCS improved with the addition of Erik Jones, Daniel Suarez and Ty Dillon competing fulltime. He was still able to finish five races in the top 10 (Daytona, Martinsville, Daytona, Indianapolis and Watkins Glen), so the season was not a complete wash.

2018 Preview: AJ Allmendinger is signed with JTG Daugherty through the 2020 season. The team will be the same in 2018 with Ernie Cope calling the shots on top the pit box and the team running Earnhardt Childress Racing (ECR) engines.

AJ Allmendinger was a disappointment on the Intermediate tracks (1.5-mile and 2-mile ovals) last year. Allmendinger ranked 28th in fantasy value at these tracks. He finished most of the races outside the top 20 but was able to have success at Texas (finished 17th and 16th), Charlotte (finished 18th) and Homestead (finished 14th). I expect Allmendinger to bounce back and be a top 20 driver at these tracks in 2018. He proved he can run well at Texas and Homestead ranks as his second-best track. He is definitely worth a spot on your team in DraftKings and Fantasy Live when the series visits these two tracks.

I wrote in my Daytona 500 Preview article last year that I had a sleeper pick that no one would use. AJ Allmendinger was my sleeper driver and he really won me a lot of money on DraftKings in the two races at Daytona. Allmendinger ranked 12th in fantasy value on the Superspeedways (Daytona and Talladega) last year. He finished 3rd and 8th in the two races at Daytona and 22nd and 31st at Talladega. Daytona ranks as the third-best track for Allmendinger so I recommend using him when the MENCS competes at the World Center of Racing.

I would not recommend using AJ Allmendinger at the steep tracks (Bristol, Dover and Darlington). He ranked 29th in fantasy value at these tracks last year. His average finishing position was 26.4. There are better options for your team at these tracks.