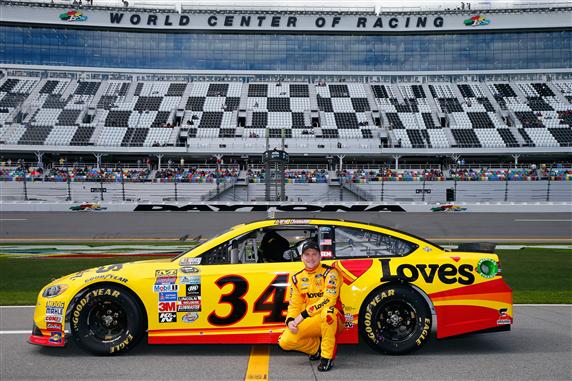 The 2017 NASCAR season is right around the corner. In order to get fantasy teams ready for the new season I decided to recap the 2016 season for my top 30 drivers and preview how I think they will perform this year. Each day I will post two driver previews until my No. 1 fantasy driver is revealed. I will continue my rankings No. 27 on my list, Chris Buescher. I expect a better season from Buescher in 2017.

2016 RECAP: It was a tale of two seasons for Chris Buescher in 2016. Before he won the race at Pocono he was an OK option in Fantasy Live and did not have much value in Yahoo fantasy. After he secured his spot in the Chase his team (Front Row Motorsports) started to receive more help from Roush Fenway Racing. Buescher scored nine finishes in the top 24 over the rest of the season.

Buescher had his best performances on the large flat tracks (Pocono and Indianapolis). He finished 25th in the first race at Pocono, 14th at the Brickyard and won the second race at Pocono (fog shortened race). Buescher also ran well at Bristol and Darlington. He finished 21st in the first Bristol race, 17th at Darlington and 5th in the Bristol Night Race.  These are the tracks he should run well at in 2017.

Making the Chase was a huge accomplishment for Buescher in 2016.

2017 PREVIEW: A lot will change for Buescher in 2017. Roush Fenway Racing loaned Buescher to JTG Daugherty Racing to drive their second car. He will be teammates with AJ Allmendinger. The cars he will be driving this year will be an improvement over what he had in 2016. We saw what Buescher could do once he started to receive more help from Roush Fenway Racing last season. Allmendinger and the JTG Daugherty Racing cars had a little more speed, so Buescher should have better equipment in 2017.

The fantasy value of Chris Buescher in 2017 will depend on his price in Fantasy Live. Buescher was one of the best values in Fantasy Live last year. Fantasy teams who purchased him at $5 really reaped the rewards later in the season. Buescher finished the season near the $12 range and that is where I expect him to be priced in the upcoming game. He will be a decent fourth pick for your Fantasy Live team in 2017.

Buescher was supposed to be the go-to-driver once fantasy teams ran out of allocations with Chase Elliott and Ryan Blaney in the Yahoo fantasy game. The injury to Dale Earnhardt Jr. and the addition of Alex Bowman to Yahoo fantasy changed everything. Buescher did not have much value in Yahoo Fantasy and that will be the case once again in 2017. Buescher was placed into Group B which significantly hurt his value. I cannot think of any tracks where I will plan on using him unless he is the surprise driver of the year.