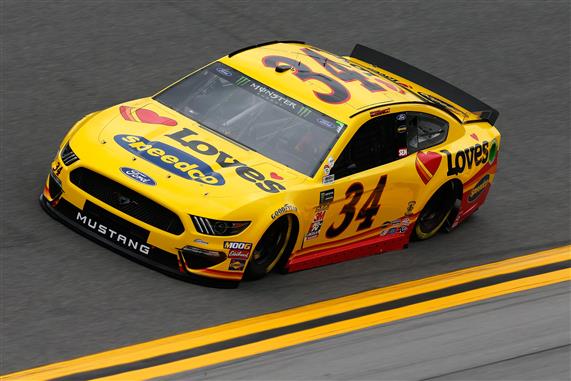 2019 RECAP: Michael McDowell made a statement to open the 2019 season. He finished fifth in the Daytona 500 and it tied for his best finish of the season (McDowell also finished fifth at Talladega). McDowell proved he was going to be a good Fantasy NASCAR pick on the Superspeedways. McDowell has a road course racing background so it was no surprise that he had fantasy value at Sonoma, Watkins and the Charlotte Roval. The No. 34 team was a better pick in DFS (Daily Fantasy Sports) than he was in season-long games (Fantasy Live and the Driver Group Game). That will not change in 2020.

2020 Preview: The No. 34 team did not make many changes for the 2020 season. Drew Blickensdefer will once again serve as the crew chief and the chassis will be provided by Roush Fenway Racing. Front Row Motorsports will scale back from three teams to two cars in 2020. McDowell said in an interview with SiriusXM Radio that the reduction in cars will allow the team to be more focused and they will have more inventory to build more competitive cars. McDowell will take on a leadership role as he will have rookie John Hunter Nemechek as his new teammate. McDowell said he is looking forward to working with JHN and teaching him how to be a Cup Series driver.

McDowell should have similar fantasy value as to what he had in 2019. The No. 34 car will be a great pick whenever the series competes on the Superspeedways (Daytona and Talladega). McDowell will also be worth a spot on your team on the road courses. He also has a history of running well at the large, flat tracks in Indianapolis and Pocono (Mostly because the draft comes into play more at these two large tracks).

Michael McDowell struggled to finish in the top 25 at the steep tracks in 2019. He finished 28th and 37th at Bristol, 24th in both races at Dover and 38th at Darlington. One of the problems with McDowell is that he qualified well at these tracks. That hurt his DFS value because he scored negative place differential points in each of these races. It is hard to get excited about using McDowell in your fantasy lineups at the flat tracks. You can find better drivers for your team in 2020. (Michael McDowell ranked 30th in fantasy points scored on the steep tracks in 2019)

Michael McDowell spent a lot of time early in his career racing in the NASCAR Rolex Grand-Am Sports Car Series. The techniques that he learned in that series has made McDowell a good sleeper pick in the Cup Series when they compete on the road courses. McDowell finished 12th at the Charlotte Roval and 16th at Watkins Glen. He had a 14.8 average running position at Sonoma but finished 25th. McDowell will be a good driver to use in the Driver Group Game to save allocations at the Road Courses. He will also be a good pick for your DFS contest too. (Michael McDowell ranked 20th in fantasy points scored on the road courses in 2019)