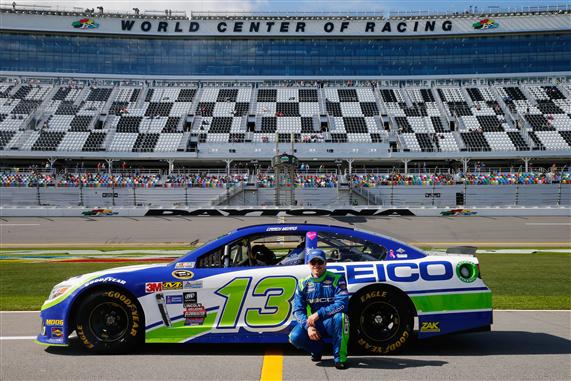 The 2017 NASCAR season is right around the corner. In order to get fantasy teams ready for the new season I decided to recap the 2016 season for my top 30 drivers and preview how I think they will perform this year. Each day I will post two driver previews until my No. 1 fantasy driver is revealed. I will continue my rankings with another driver who currently does not have a ride for the 2017 season, Casey Mears.

2016 RECAP: It was not a good season for Casey Mears at Germain Racing. He did not have any top-five or top-10 finishes and only led seven laps all season. Mears has been known as a good sleeper pick on the Superspeedway tracks and that was once again the case in 2016. Mears had his best finish of the season (12th) in the July race at Daytona. He is not known for being a great road course racer, but his best tracks in 2016 were at Sonoma and Watkins Glenn. Mears scored the 18th most points in Fantasy Live (50.5 points) on the road courses. That is not bad for a driver at his price. Overall Mears was overpriced in Fantasy Live and was not an option in Yahoo Group B (Other than an allocation saver at the Superspeedways).

2017 PREVIEW: Casey Mears still has not signed a contract for the 2017 season but most speculate he will drive the No. 33 car for Circle Motorsports. The team is expected to have full support from Richard Childress Racing, a similar situation to what Mears had with Germain Racing in 2016.

I do not expect much improvement from Mears in 2017. His average starting position was 24.3 and his average finishing position was 25.6. Fantasy teams need better stats then that if they want to compete in their leagues this season. Mears will still have limited value in Yahoo leagues on the Superspeedways. He has finished six of his last seven races at Daytona and Talladega in the top 12 with a 78.6 Driver Rating.

Mears value in Fantasy Live will depend on his price. Mears ended the 2016 season priced under $10. If he stays at $10 or falls in price, Mears will be a good pick for your Fantasy Live team. I would never pay much more than $10 for him though.

I do not expect Mears to have any top-five finishes, but I think he can sneak into the top 10 at one of the races at Daytona or Talladega. Drivers need to consistently finish in the top 15 and lead some laps in order to have value in fantasy racing. That is not going to be Mears in 2017. I expect Mears to finish as the 29th ranked fantasy driver in 2017.