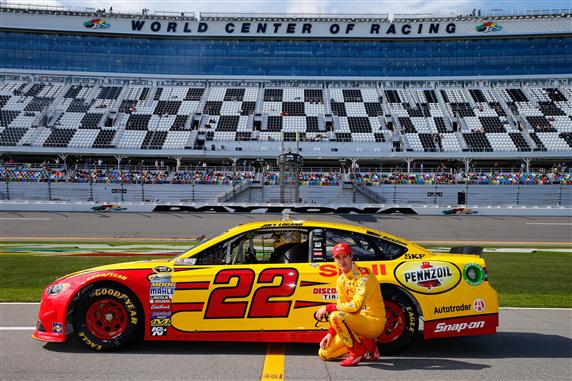 The 2017 NASCAR season is right around the corner. In order to get fantasy teams ready for the new season I decided to recap the 2016 season for my top 30 drivers and preview how I think they will perform this year. Each day I will post two driver previews until my No. 1 fantasy driver is revealed. I will continue my rankings with Joey Logano.

One of the things the No. 22 team has going for them entering the 2017 season is that they finished five of the last six races in the top four, including the wins at Talladega and Phoenix. Logano also came close to adding another win at Homestead. Most of the struggles for the team were early in the season, so fantasy players should not worry about an off year from Logano.

Logano was one of the best drivers in Yahoo Fantasy Group A. He consistently scored bonus points for qualifying and often finished in the top five. His best race was at Michigan where he won the pole, led 138 of the 200 laps on his way to Victory Lane. It was surprising to see that Logano was the second-best pick on the road courses. He finished third at Sonoma and second at Watkins Glen. It was not hard finding eight tracks to use your allocations with the No. 22 in 2016.

Logano was priced around $27 for most of the season in Fantasy Live. Although his price was high he was still a good value. The only thing that hurt Logano in the Fantasy Live game was that he often qualified up front and failed to score many bonus points for position differential. Usually when he started in the top four he was able to score bonus points for leading laps, so that offset the position differential problem and still made him a good pick for your team.

2017 PREVIEW: Very few teams enter the 2017 season with as much momentum as the No. 22 team. They were one of the fastest cars in the second-half of the Chase. Everything will remain the same with the team in 2017. Todd Gordon will once again serve as the crew chief and Shell-Pennzoil will serve as the primary sponsor. Team Penske will now have four more cars to bounce ideas off of since Stewart-Haas Racing has made the switch to Ford. I expect the addition of the SHR cars will help the other Ford cars in 2017.

Logano was placed into Group A of Yahoo Fantasy and he should once again be one of the more popular picks in 2017. It is almost a good idea to select Logano for every race because of his ability to win the pole and score bonus points for your team. His best tracks will be Michigan, Texas, Kansas, Chicago and his home track in New Hampshire. Logano will also be a good pick at the road courses, but I think the best philosophy will be to save your allocations with Logano at the road courses and use other drivers like Denny Hamlin.

Logano should be highly priced in the Fantasy Live game. He will be worth every penny if he post stats similar to what he had in 2015 (6 wins and 1,431 laps led). I have no idea why team Penske started so slow in 2016 after running so well the year before. I expect Logano to post the best stats of his career in 2017 and become one of the best options in Fantasy Live.