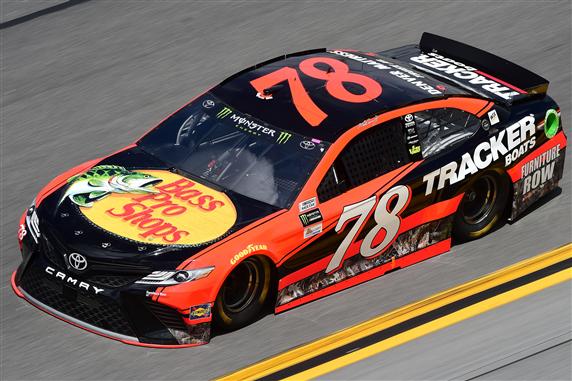 2018 RECAP: Martin Truex Jr. followed up his Championship season in 2017 with a second-place finish in 2018. He has been one of the best drivers for the last four seasons and that will not change in 2019. Truex won four races (Auto Club, Pocono, Sonoma and Kentucky), had 20 finishes in the top five (55% of the races), 21 finishes in the top 10 (58% of the races), won four poles (Second-best in the Cup Series) and led 1,016 laps (Third-best in the Cup Series). Truex was an excellent fantasy pick at all tracks. If you could simply use Truex in your fantasy lineup in every race, you would probably win your league. He is that good. (Martin Truex Jr. ranked 3rd in fantasy points scored in 2018)

2019 Preview: There will be a lot of changes for Martin Truex Jr. in 2019 but his team is used to fighting adversity. Furniture Row Racing closed their doors at the end of the 2018 season. Truex and his crew chief, Cole Pearn moved over to Joe Gibbs Racing to take over the No. 19 car. The team also took Bass Pro Shops with them to JGR. Bass Pro Shops will be the primary sponsor (24 races) for Truex in 2019.

I am not concerned about the team change for Truex. He worked closely with JGR in the past and he still has his crew chief with him. I expect Truex to work well with his new teammates until the playoffs start. It will be interesting to see how well Truex and Kyle Busch play together once they start fighting for the championship. Both drivers have a strong will to win. I have a hard time seeing them working together as we get to the end of the 2019 season. Both drivers should make it to the final four, but this whole thing could blow up if Busch’s ego gets in the way.

Martin Truex Jr. has competed in 55 races on the Superspeedways (Daytona and Talladega) and he has never been to Victory Lane. He came close last year when he finished second in the July race at Daytona. Truex is a good driver at the restrictor-plate tracks but running up front puts him in position to be collected in the wrecks. That is often what happens with Truex. His average finishing position in the last five races at Daytona is 19.2. His average finishing position in his last five races at Talladega is 29.4. Save Truex for the smaller tracks. His allocations in the Driver Group Game are too important to waste on a Superspeedway. (Martin Truex Jr. ranked 16th in fantasy points scored on the Superspeedways in 2018)

Martin Truex Jr. has a lot of value at Martinsville and Loudon. He has been good but not great at Phoenix and Richmond. Truex has finished 2nd, 3rd and 4th in his last three races at Martinsville. Joe Gibbs Racing usually runs well at this track so Truex should be considered for your fantasy team at the paper-clip shaped track. Truex has finished 3rd, 4th and 5th in his last three races at Loudon. He has also led 596 laps in his last five races at the Magic Mile. Truex must be in all fantasy lineups in New Hampshire. Truex is too inconsistent to use at Phoenix or Richmond. He usually finishes in the top 10 at these tracks but you need top five finishes whenever you use an allocation with Truex. (Martin Truex Jr. ranked 2nd in fantasy points scored on the flat tracks in 2018)

Martin Truex Jr. is one of the best picks in the field at his home track in Dover. He has finished four of his last five races at the Monster Mile in the top four, including a trip to Victory Lane in 2016. His success at Dover has not translated into success at Bristol. Truex finished 30th in both races in Thunder valley last year. Do not use Truex at Bristol. Truex has been a good but not great at Darlington. He finished four consecutive races at the Lady in Black in the top 11. Make sure Truex is on your fantasy team at Dover, consider him for Darlington and fade him at Bristol. (Martin Truex Jr. ranked 9th in fantasy points scored on the steep tracks in 2018)