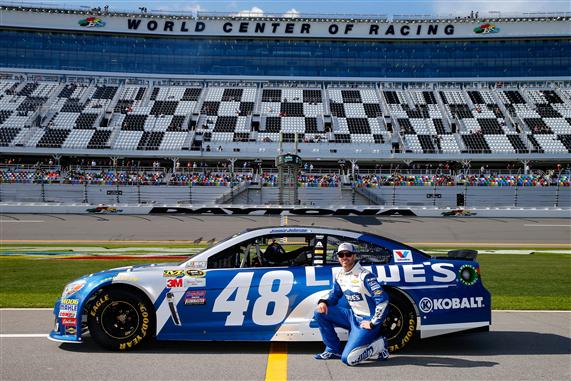 2017 RECAP: Jimmy Johnson finished 10th or worse in the point standings for the third time in the last four years. The only year he finished inside the top 10 was in 2016 when he won the NASCAR Championship. The No. 48 team usually starts the season hot, cools off over the summer and then heats up at the end of the year. Johnson ran well early in the season (he won spring races at Texas, Bristol and Dover), but he went into a slump in the summer and could not find a way to heat back up. It is obvious the new Stage racing format does not fit Johnson’s racing style because the No. 48 is a team which likes to work on their car and slowly make their way to the front at the end of the races.

2018 Preview: Despite winning the 2016 NASCAR Championship, Johnson is showing signs of decline. He has only finished 37% of the races the last two seasons in the top 10. Johnson ranked 10th in fantasy value in 2017. I would not count out the No. 48 team just yet. Chevy will introduce a new Camaro chassis in 2018. Chad Knaus is one of the best crew chiefs in the garage. I would be surprised if he was not one of the first crew chiefs to figure out the new car. My advice for fantasy teams is to take a wait and see approach with Johnson. If Johnson enters the season running well, get him into your lineup and use him until he cools off. If he starts slow, use the other drivers and wait for Johnson to post some top-five finishes before you use the No. 48 car on your team.

Jimmie Johnson has the best career statistics at the Intermediate tracks (1.5-mile and 2-mile ovals). He has 31 wins, led 6,303 laps and has an 11.1 average finishing position. He has not been as strong the last two seasons as he has been in the past at these tracks. Johnson ranked 12th in fantasy value at these tracks last year. It is incredible that Johnson only had four finishes in the top 10 in the 15 races on the Intermediate tracks. Johnson will be a good pick at Atlanta and Texas but I would wait to see how he is running before I used him at the other tracks.

There are better options for your fantasy team at the Superspeedways (Daytona and Talladega) then Jimmie Johnson. The two tracks rank as his two worst tracks on the schedule. Johnson does have two wins at Talladega and three wins at Daytona but he also has 17 DNFs. Johnson ranked 15th in fantasy value last season. Save Johnson for the smaller tracks.

Jimmie Jonson was good but not great at the Flat tracks (Phoenix, Richmond, Martinsville and Loudon) in 2017. Johnson ranked 9th in fantasy value at these tracks. Martinsville is one of his best tracks and he is usually a “must start” driver on your fantasy team. Johnson failed to finish either of the races at the paperclip-shaped track in the top 10. He does have nine Grandfather clocks though, so do not count him out at Martinsville. Johnson is also a good choice Phoenix early in the season. He usually runs better in the desert in the spring then he does in the fall. Wait to see if he has any momentum entering the races at Richmond and Loudon before you use him in your fantasy lineups.

Jimmy Johnson is at his best at the Steep tracks (Bristol, Dover and Darlington). He won two of the five races and had a 5.6 average finishing position at these three tracks last year. Johnson ranked 3rd in fantasy value at the Steep tracks. Johnson has 11 wins at Dover. He must be on your team at the Monster Mile. He is also a good choice at Bristol. There are better drivers for your team at Darlington.

There are better drivers for your fantasy team at the Road Courses (Sonoma and Watkins Glen) then Jimmie Johnson. He finished both races outside the top 10 last year and I expect the same in 2018. Johnson has an average finishing position of 26.7 in the last four races at Watkins Glen. Do not use him at this track. He has some value at Sonoma but I still think you can find a better driver for your team.